Global stocks saw a boost in sentiment on Monday following the resumption of trade talks between the U.S. and China.

The Dow Jones has remained stable in the 26,700-point region throughout the past week, and the SSE Composite, a stock market index of all stocks that are traded at the Shanghai Stock Exchange, surged by more than two percent within hours to close at 3,044.

According to The Wall Street Journal, nearly half of Federal Reserve officials project that the central bank’s benchmark interest rate will drop by the end of 2019 due to intensifying geopolitical risks.

In June, the Federal Reserve voted not to decrease rates, likely to observe whether the G20 summit would lead to a significant development in the trade discussions between the U.S. and China.

Although both countries have agreed to open negotiations – with the U.S. pausing the additional imposition of tariffs on Chinese goods and China beginning to purchase American farm products – no definitive decision has been made in regards to a comprehensive trade deal.

Strategists anticipate the Federal Reserve will still decrease the benchmark interest rate despite the resumption of trade talks because of the lack of progress in revitalizing global economic growth in the past six months. That rate cut may sustain the growth of global stocks.

On July 31st, it will be the longest in history. Meanwhile, the market is pricing in a 100% probability of a Fed Rate CUT that very same day, and 2 more cuts by year-end. pic.twitter.com/14XWd9RkUZ

Tom Barkin, a former McKinsey executive, said that six months ago, it seemed as if Brexit was going to materialize and a full trade accord between China and the U.S. was set to be signed.

Fast forward half a year, and neither issue is close to being resolved, severely impacting the growth rate of three key regions in the U.S., China, and the Eurozone, leading strategists to question whether the recent stock rally is sustainable. 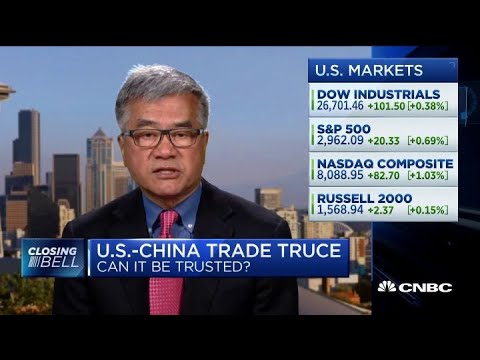 Last week, Fed chairman Jerome Powell said that a lot has changed in the global risk picture with concerns about global growth. With U.S. President Donald Trump pressuring the Fed to ease its policy similar to the European Central Bank (ECB), strategists anticipate a rate cut will occur in the near term.

“Quite a lot has changed. The global risk picture has changed, really just in the last six to eight weeks. And it’s around trade developments and concerns about global growth,” Powell stated.

But Is This Recovery Sustainable?

Resuming talks marks a key milestone for the U.S. and China, but Huawei could remain a sticking point as negotiations proceed.

Representatives from both the Democratic and Republican parties have expressed their opposition toward enabling Trump to use Huawei as a bargaining chip in the trade talks, which may extend the discussions.

“The US made big concessions? US companies selling equipment to Huawei is just going back to one and a half months ago; no new tariffs is going back half a month ago. China will actually buy more American goods and pay the cost of reforms. Some Americans still unsatisfied?,” Hu Xijin, the editor-in-chief of the Global Times, said.