The Oklahoma City Thunder was supposed to be bottom-dweller in the star-studded Western Conference. The franchise lost their two best players Russell Westbrook and Paul George in the offseason. The pieces they got in return were multiple draft picks and pick swaps in addition to an aging star Chris Paul and Danilo Gallinari, who’s a role player at best. They also got second-year guard Shai Gilgeous-Alexander.

Sure, Oklahoma’s future looks bright with seven first round draft picks and multiple pick swaps. However, they’re not expected to be competitive. The departure of not one but two franchise players signaled a total overhaul.

Nevertheless, 31 games into the season and the Oklahoma City Thunder are serious playoff contenders. They are above .500 with a win/loss record of 16-15 to take the 7th spot in the West. A star is emerging in OKC and his name isn’t CP3.

For the class of 2018, much of the spotlight was being enjoyed by Trae Young and Luka Doncic, and for good reason. These two guards have quickly risen to become their teams marquee players. There’s another guard in that draft class that deserves your attention: Shai Gilgeous-Alexander.

SGA was the centerpiece of the trade deal that sent Paul George to the Clippers. The Clippers’ front office didn’t want to part ways with the former Kentucky Wildcat. They saw the young man’s potential and they wanted him to be the face of the franchise.

With a future All-Star guard in the roster, the OKC Thunder have a fresh franchise player to build around. This gave the Thunder front office the audacity to trade former MVP Russell Westbrook.

Gilgeous-Alexander Is Starting to Unleash His Potential

The Oklahoma City Thunder are 7-3 in their last ten games. They are also 2.5 games ahead of the eighth seed Portland Trail Blazers. OKC’s rise as the dark horse of the West is largely because SGA is stepping up to the plate.

In addition, the sophomore guard is posting superstar numbers as of late. SGA is averaging 26.4 points per game in his last five games while shooting at a high clip of nearly 53% from the field. With Gilgeous-Alexander spearheading the offense, the Thunder convincingly dispatched teams such as the Trail Blazers, Jazz, and even the Clippers. 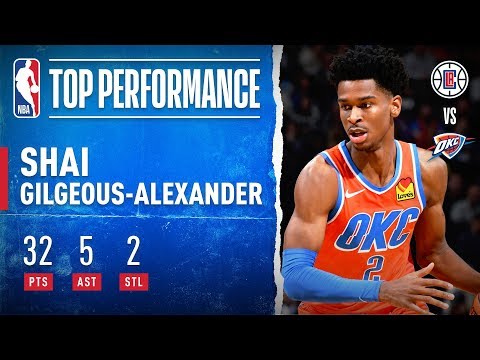 The Second-Year Guard Has the Repertoire of an All-Star

Gilgeous-Alexander is not a dead-eye shooter like Trae Young. He’s also not an excellent facilitator like Luka Doncic. In addition, he’s not fast and he’s not athletic.

His talents are one of a kind. SGA is a crafty slasher with tremendous body control.

Gilgeous-Alexander’s ability to drive sets up other facets of his game. With defenders wary of his penetration, SGA is often left alone beyond the arc where he is shooting at a decent 35%.

The young guard can also consistently hit tough floaters to create his own shot.

Shai can also hit the jumper off the dribble.

These are the shots powering OKC to grab the seventh seed in the West. CP3 may be the team’s veteran leader but there’s no doubt that OKC’s future is in the hands of a rising star SGA.