EA announced last week that hip-hop artist turned media jack of all trades, Snoop Dogg, was making his way to NHL 20 to offer insightful takes about on-ice action from the commentary box.

ice hockey really be lit now with me in the booth!! 😏🔥🔥 @easportsnhl #NHL20 https://t.co/GY3JKhltbN pic.twitter.com/HSbPR5ch8I

EA has thrown together a trailer for the occasion where you can see Snoop having a whale of a time in the booth. Jumping into NHL 20, you can now hear Snoop Dogg dish out expert analysis along the lines of this gem;

See, that’s what I’m talking about! Make the goalie think you’re doing that, but then you do this, and you end up with a goal. 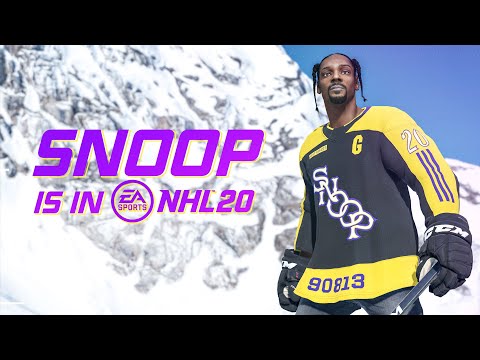 Aside from lending his unique flavor of quips, Snoop Dogg now appears in the game as a player, slender figure and all, and has a custom team in Hockey Ultimate Team Squad Battles.

While the addition of Snoop Doog adds a bit of flair to the pick-up and play arcade qualities of NHL 20, it says a whole lot more about where EA’s priorities lie.

We won’t beat around the bush. The NHL franchise is showing its age. We’re talking graphics that trail behind modern standards. And even those of other yearly sports franchises, which don’t set the bar very high bar to begin with.

Then there’s the litany of bugs and a distinct lack of content to keep players interested. We’re just scratching the surface here.

Call us cynical, but NHL 20 is merely a reskinned version of NHL 19 with a roster update and a few token features thrown in for good measure.

Mind, we shouldn’t be surprised. It’s EA being EA.

But it does show that the gaming giant is more than willing to throw money at a superficial NHL 20 add-on, albeit an entertaining one, in the form of Snoop Dogg, rather than invest resources in making the core game better year on year.