Sasha Baron Cohen's ADL speech proves yet again that entertainers should stick to what they know and not try to influence policy. | Image: Valerie MACON / AFP

British comedian Sacha B. Cohen went after social media giants in a fiery speech Thursday before the Anti-Defamation League. In his keynote speech at the ADL’s “Never Is Now” Summit on antisemitism and hate, the “Borat” actor called for regulating Google, YouTube, Facebook, and Twitter.

But the kind of regulation Cohen envisions would create a vast thought police bureaucracy. It would waste an enormous amount of resources on a futile endeavor and squelch free speech in the process. One can easily imagine a future scenario in which a truly dangerous despot comes to power and finds such an apparatus very useful in muting dissenting voices. 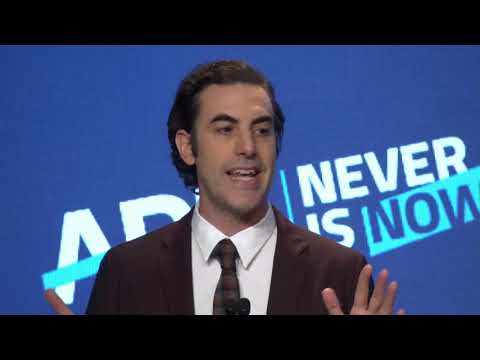 In his speech, Cohen says:

There is such a thing as objective truth. Facts do exist.

And if these internet companies really want to make a difference, they should hire enough monitors to actually monitor, work closely with groups like the ADL, insist on facts and purge these lies and conspiracies from their platforms.

At best the comedian’s suggestion is entirely unfeasible. At best it would create something akin to the “national security theater” of the TSA canvassing every airline passenger with invasive pat downs.

Cohen calls for “enough monitors” to actually monitor like it’s that obvious and simple. But how many monitors would be enough to monitor YouTube’s 2 billion users, Facebook’s 2.5 billion, and Twitter’s third of a billion users?

Who Monitors The Monitors?

So under Sacha Baron Cohen’s proposal, the ADL and Southern Poverty Law Center (SPLC) would partner with Facebook and Google. They’d hire more people than Walmart or the U.S. Dept. of Defense to read or watch the entire Internet’s posts and comments. And these deputized thought monitors would get to decide what people are allowed to say online.

With a straight face, Cohen seriously suggests “groups like the ADL” are impartial arbiters of objective truth and facts. But the ADL is not a disinterested, impartial observer. It stakes out political positions on controversial issues such as immigration to the United States, and how to draw the boundaries of sovereign nations in the Middle East.

Cohen is right that objective truth and facts exist. But only a tyrant lays absolute claim to perfect knowledge. No one can seriously say they are beyond error. Assuming the power to silence others is a hallmark of fascism.

And in addition to truth and facts, values and our appraisal of the facts exist too. These are even more subject to controversy and differing points of view.

The ability to discuss controversy openly in a publicly-accessible digital archive is a superlative triumph of Silicon Valley engineering and design.

The Anti-Defamation League itself has admitted that it is not infallible in its evaluation of the facts. The ADL once lobbied Congress against acknowledging the Armenian Genocide. It reversed this in 2016.

No one can seriously claim to be infallible. To safeguard free thought, free speech, and our democratic society, Silicon Valley should not hire an army of censors as Sacha Baron Cohen suggests. We have a right to speak. And we have a right to listen to others and decide for ourselves what we think.

America is strong enough, smart enough, and good enough to keep the conversation open. Sunlight is the best disinfectant for hate and lies.