One of Russia’s richest women has died after the private jet she was traveling in crashed in Germany.

Natalia Fileva, the co-owner and chairwoman of S7 Airlines, was flying from Cannes in France when the single-engine, six-seat aircraft crashed and burned while approaching an airport in southwestern Germany on Sunday afternoon, according to The Siberian Times. She was fondly referred to as the “Iron Lady” of Russian aviation in certain circles. 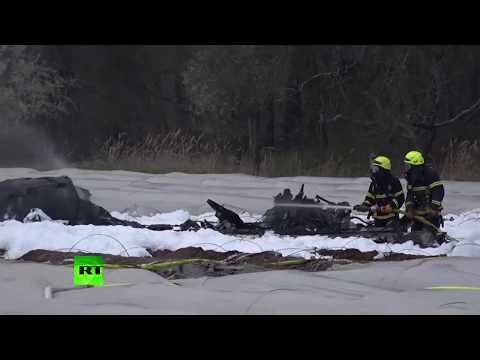 In a statement S7 Airlines termed her death an “irreparable loss”:

“S7 Group team extends sincere and heartfelt condolences to Mrs. Fileva’s family and loved ones. The memory of her as an inspiring and sympathetic leader and a wonderful person will forever stay in the hearts of all S7 Group employees.”

The German Federal Bureau of Aircraft Accident Investigation is probing the cause of the crash.

According to German police, three people were aboard the aircraft including the pilot when it crashed. Reports from Russian media indicate that the other casualty was Valery Karachev, Fileva’s father. They are believed to have been traveling to Frankfurt for medical treatment.

Natalia Fileva, co-owner of Russian S7 Airlines and chair of the S7 group died in a plane crash in Germany aged 55. The private Epic LT plane was en route from Cannes-Mandelieu airport in France to Egelsbach airport in Germany as it crashed killing the pilot and two passengers pic.twitter.com/L4SHslZV4q

Two other people also died when a police car rushing to the crash site collided head-on with another vehicle. The two who died were in a civilian car. The occupants in the police car only suffered injuries.

Last year Forbes magazine estimated Fileva to be worth approximately $600 million. The business publication listed her as Russia’s fourth richest woman. Fileva co-owned S7 Airlines with her husband Vladislav Filev who doubles up as the firm’s CEO.

The Russian airline adopted its current name in 2005. It previously went by Sibir Airlines. S7 Airlines operates from two hubs – one in Moscow and another in Siberia’s largest city, Novosibirsk. It is the largest privately-owned airline in Russia. Most of its fleet consists largely of Airbus planes.

S7 one of First Airlines to Ground Boeing 737 MAX 8

After an Ethiopian Airlines-owned Boeing 737 Max 8 plane crashed last month, S7 was one of the world’s first carriers to ground the ill-fated jets.

The airline has enjoyed steady growth, which S7 has achieved by increasing the number of aircraft and flights. Most of the international flights that S7 Airlines offers are to post-Soviet republics (Commonwealth of Independent States’ countries).

It also flies to Europe, Asia Pacific, Southeast Asia, and the Middle East.