By CCN.com: Epic Games is buying Psyonix, and to say that many in the Rocket League community are unhappy is putting it woefully mildly.

The Fortnite creator is desperate for exclusives to prop up its Epic Games Store against Steam. Flush with cash after Fortnite’s jaw-dropping success, they have claimed one of the shining jewels of the esports movement. Despite Psyonix alleging they won’t leave Steam users out in the cold, it seems inevitable that winter is coming for Rocket League’s original community. 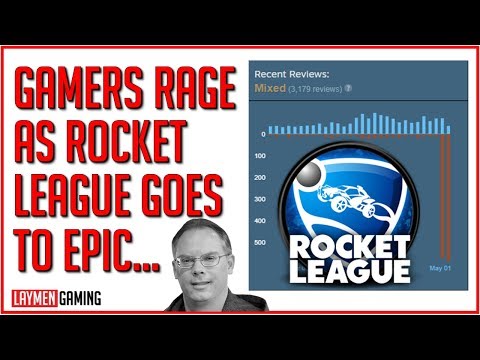 Download Exclusivity Must Be Epic Games’ Goal for Rocket League

It isn’t exactly a big leap of faith to assume that Epic will want to make their high-profile new acquisition an exclusive. You need to get a return on your investment, and you can’t maximize that if Steam continues to benefit.

The PR departments at Psyonix and Epic Games are fully aware of the potential backlash that yanking the game would cause. Why is Psyonix playing up their historical association with Epic? To make this seem like less of a big deal.

Thus the smart corporate play is to perform a slow-bleed, sucking the life out of Steam users. At first, it will only be minor things, but then it will snowball into more significant incentives to drag you over to Epic Games. Psyonix has all but confirmed this would be the case.

“In the short term, nothing will change at all. We’re still committed to providing Rocket League with frequent updates that have new features, new content, and new ways to play the game for as long as you’ll have us.”

So in a subjectively short time frame, nothing will change. How reassuring. I hope you haven’t been building some painstakingly well-crafted mods because you could wake up one morning and find that they are suddenly useless.

If you play Rocket League on Linux, it’s probably time to start planning the funeral. While your life span remains open-ended, Epic Games founder Tim Sweeney has been very clear about what he thinks about incorporating Linux into the set-up.

Installing Linux is sort of the equivalent of moving to Canada when one doesn’t like US political trends.

Nope, we’ve got to fight for the freedoms we have today, where we have them today.

As the Fortnite juggernaut chugs along, prudent businesses are always aware that their products have a popularity shelf-life. This is why Epic is making moves like this now, with Fortnite seemingly at its peak.

If a game was ever going to be evergreen, it’s something as simple and playable as Rocket League. Clearly, the esports potential is colossal as well.

Will Epic Games find a way to screw it up?