Robert Kraft — the billionaire owner of the New England Patriots — issued a formal apology after being arrested in a Florida prostitution sting.

But why should the 77-year-old widower apologize? Because he paid for oral sex at a seedy massage parlor? Who cares?

Robert Kraft: ‘I Am Truly Sorry’

“I am truly sorry,” Kraft said in a March 23 statement. “I know I have hurt and disappointed my family, my close friends, my co-workers, our fans and many others who rightfully hold me to a higher standard.”

“I have extraordinary respect for women. My morals and my soul were shaped by the most wonderful woman — the love of my life — who I was blessed to have as my partner for 50 years.”

Kraft then promised that he’ll work hard to “regain” the public’s confidence, yada-yada.

In his statement, Kraft did not admit guilt to the two-count misdemeanor charges pending against him.

Moreover, his attorney, William Burck, reiterated that Kraft’s case has nothing to do with human trafficking. An angry Burck also accused Florida law enforcement of obtaining evidence illegally.

“There was no human trafficking, and law enforcement knows it. The video and the traffic stop were illegal. Law enforcement just doesn’t want to admit it.”

“The state attorney needs to step up and do the right thing and investigate how the evidence in this case was obtained.”

Robert Kraft’s attorney, William Burck, to ESPN (2/2): “The state attorney needs to step up and do the right thing and investigate how the evidence in this case was obtained.”

The media have made a circus of Kraft’s arrest because prosecutors initially claimed it was part of a massive “human trafficking” sting operation.

However, no one has been charged with trafficking. Moreover, police say the massage therapists were not held against their will and were free to leave anytime.

Furthermore, there’s no evidence that Kraft suspected that the masseuses he solicited could hypothetically have been trafficked.

So basically, Robert Kraft’s arrest was hyped in the media even though it was a simple prostitution bust. 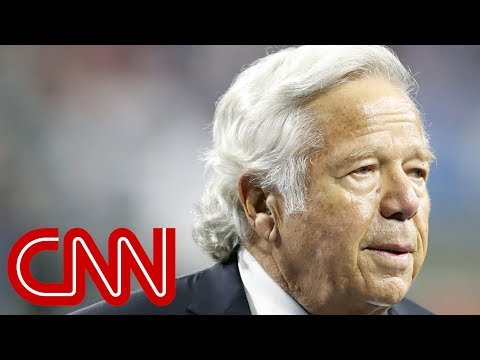 All this over-the-top fanfare suggests that it is Kraft who deserves the apology — from Florida law enforcement and from the irresponsible press.

Here’s why: In their desire to claim a celebrity “scalp,” local bureaucrats are basically blackmailing Kraft by saying they’ll release his “graphic, explicit” sex video if he doesn’t accept a plea deal under which he agrees to admit guilt.

As CCN.com reported, Kraft does not want to admit guilt as a matter of principle because he does not have a prior criminal record.

In addition, the media elevated a simple prostitution arrest (which happens every day) because it involved a rich, powerful celebrity. And that sells newspapers and drives traffic to news websites.

Here’s Why Prostitution Should Be Legalized

When all is said and done, this entire incident and all the hypocritical pearl-clutching surrounding it is laughable.

First, there’s no tangible benefit to society to have a mild-mannered 77-year-old prosecuted because he wanted to pay a willing masseuse $100 for oral sex. I’d prefer that law enforcement pursue murderers, rapists, and other violent criminals — not some senior citizen who wanted a hand job.

Second, prostitution should be legalized. Research suggests that decriminalizing sex work would help the women who engage in the sex trade by making it safer, improve their access to healthcare, and curb human trafficking by violent cartels.

A Random Celeb’s Marriage Is Not My Business

Some say that prostitution is immoral. Maybe it is, but that’s a judgment for each individual to make.

Prostitution has been around since the beginning of time, and it will be around through the end of time. There’s a reason why it’s called the “world’s oldest profession.”

If Robert Kraft were married and he paid for extramarital sex, then that’s an issue between him and his wife. But it’s not your business — and it certainly isn’t mine. Unless someone’s marriage involves an underage child or abuse, it shouldn’t be anyone else’s concern.

Kraft married his wife Myra in 1963, and together, the couple had four sons. He was said to be a devoted husband throughout their 48-year marriage. Myra died of cancer in 2011 at the age of 68.