Riot Games has announced that Legends of Runeterra will be going to open Beta later this month. The League of Legends creator’s new game will be a digital card game in the same vein as Hearthstone and Magic Arena. In fact, it looks very similar to Hearthstone in particular at first glance.

In reality, Legends of Runeterra seems to combine elements from both games. It has Hearthstone’s resource system, but Magic’s blocking mechanics, for example. Despite any other nuances that make the game technically different, it seems like Riot has just rehashed old gameplay. So why does this need to exist?

Why Does Legends of Runeterra Exist?

There is currently an overabundance of digital card games. It’s not just the big players like Magic and Hearthstone. App stores are filled to bursting with games like Animation Throwdown and Spellstone. So why on earth have Riot decided to move forward with a game like Legends of Runeterra?

Hearthstone firmly holds the crown for digital card games. While Magic for years has retained that crown in the physical space, they have a loyal enough fanbase that a digital version made sense. Legends of Runeterra will presumably be relying on the League of Legends name to pull in players.

The issue is that this probably won’t work, at least not on its own. Anyone who wants to play a digital card game is already playing Hearthstone or Magic. They’re unlikely to be tempted away from games they’ve sunk time and money into for an as-yet-unproven card game. While Legends of Runeterra might make Riot some money, for now, it’s unlikely to stay all that profitable for long. 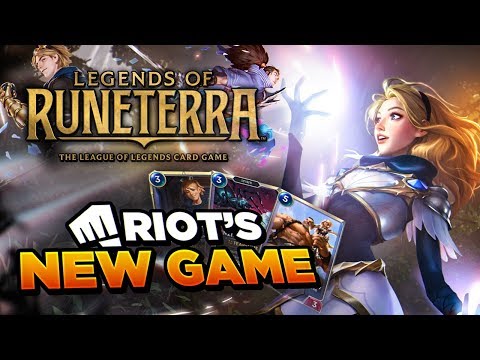 The Game May Be Fun, But That Won’t Be Enough

Compared to games with more established brands behind them, Legends of Runeterra is actually pretty impressive. It’s well animated to a fault, and it does have some interesting facets. The way that combat takes place in lanes could lead to some interesting interactions for instance.

The problem is that digital card games are a niche product. Magic and Hearthstone pull in millions of players, not leaving much room for another big game to exist in that space. It all rings a little bit of the post-WOW surge of MMO titles. With card games making some companies a lot of money, it’s not so shocking that others are jumping straight on that bandwagon.

At the end of the day, Riot can do what they like with their IPs. Maybe Legends of Runeterra will come out and be so good that it jostles for space with Hearthstone. If Riot is lucky it’ll be profitable enough to survive. At least, it will be until Magic Arena releases across multiple platforms in which case they’re probably screwed.