Legendary economist Art Laffer believes President Donald Trump – not an independent board of governors – should control the reigns of the US Federal Reserve.

Laffer told CNBC’s “Squawk Box” that the president, along with Congress, should govern the central bank.

“Why should monetary policy, this very powerful tool to control the economy, not be subjected to democracy just like every other instrument of government. It should be controlled by the president, by the legislative and the executive branches.”

Laffer, whose career spans more than 40 years, rose to prominence in the 1980s. The then-president Ronald Reagan appointed him to the country’s Economic Policy Advisory Board. Now, however, his comments arrive as Trump relentlessly bashes the Fed. Laffer admits that the effectiveness of independent central bankers today is probably no longer as relevant as it once was. 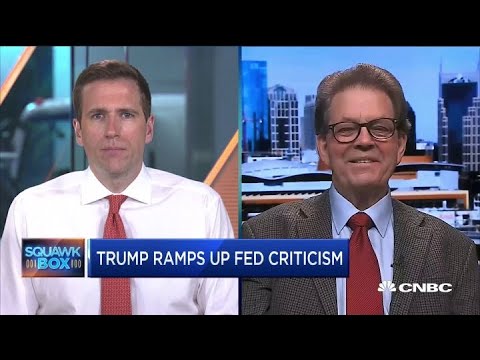 The Federal Reserve was established as an independent entity in 1913. It formed precisely to prevent politicians from using it for hit-and-run tactics during the election cycle. Since sitting presidents can only serve a maximum of two terms, a president-managed central bank policy would likely create a scenario where short-terms gains are prioritized over longer-term prosperity.

Indeed, Trump is well known for labeling the market as a “big, fat, ugly bubble” prior to taking up office. Since 2017, however, the president has conveniently changed his tune to fit the prevailing trend.

Stock Market is heading for one of the best months (June) in the history of our Country. Thank you Mr. President!

Powell’s latest comments suggest the Fed is already bending to the will of the market. How exactly would Trump, or any president for that matter, manage central bank policy? Would he take counsel from economists, experts or maybe Congress?

What about the well-connected speculators on Wall Street? Leaving that kind of power in the hands of one man may prove disastrous.

It’s hard to find a rock-solid reason for a centrally run Fed, bar one major issue – transparency. In 2015 Senator Rand Paul unsuccessfully tried to lobby his “Audit the Fed” bill. He re-introduced that motion at the beginning of this year as calls from main street grew louder for central bank openness.

In an interview with MarketWatch, Paul solidified this view by explaining:

“It is an incredibly popular bill with the public. When we’ve done public polling, 70 to 75% of the public thinks that auditing the Federal Reserve would be a good idea.“

The Fed is still not subject to particular oversight from either Congress or the president. If Trump were to play an active part in running the Fed, Americans may for the first time actually have a say in how the country’s finances are run.

Laffer is the obvious first backer of such an idea. He witnessed first hand the Fed jack interest rates to 20% back in 1980. But now he claims that monetary policy is not a crisis like it was back then. Returning to a pre-Fed era where the president had more economic say may once again be on the cards.