PUBG Mobile is taking a leaf out of Fortnite’s playbook, announcing today the start of a crossover event with AMC’s smash hit zombie series The Walking Dead.

AMC, PUBG Corporation, and Chinese mobile gaming giant Tencent, which owns a stake in PUBG’s umbrella company, hit on a deal earlier this year. The crossover will run for quite some time, first to commemorate the premiere of The Walking Dead’s tenth season on Sunday, Oct. 6., and then in parallel with the remainder the season well into next year.

The Walking Dead has arrived in PUBG MOBILE!

Play as your favorite characters, or utilize their iconic gear, to overcome a threat more dangerous than any walker! #TWD pic.twitter.com/f5yirggkBF

The event is now live on PUBG Mobile servers and players have the opportunity to roam across Erangel peddling the crude good looks of Norman Reedus.

He’s not rendered in quite the same stunning detail as he will be in Kojima’s upcoming Death Stranding, the fruit of mobile’s graphical down scaling, but there’s no question that we are dealing with The Walking Dead’s Daryl Dixon. 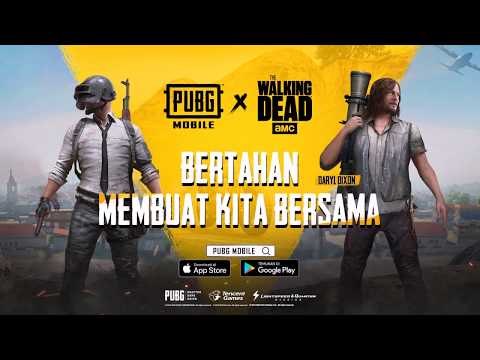 Alongside Reedus, the crossover features skins of members of the series’ ensemble cast such as Negan and Rick Grimes.

The Walking Dead lore is also carrying over to PUBG Mobile in the form vehicles and weapons, so you’ll be able to dart around on Dixon’s familiar bike or wield Michonne’s signature katana.

PUBG and AMC teamed up previously for a tournament held on streaming platform Twitch last year, but it’s the first time PUBG is implementing in-game The Walking Dead-themed cosmetics in a crossover format we have grown accustomed to thanks to countless Fortnite collaborations.

Borderlands 3, Stanger Things, Batman, The Avengers; you name it, Epic Games has run the gamut of big-name franchises across the entertainment industry – and to significant effect.

PUBG Mobile is itself no stranger to crossovers on a smaller scale with Godzilla: King of Monsters and Resident Evil 2 collaborations in the bag. Both proved beneficial to growing PUBG Mobile’s 50 million daily active users.

The linkup between PUBG Mobile and AMC is beneficial to both parties, but PUBG Corporation is seemingly eager to double down using tactics refined by its most direct competitor.