Meghan Markle & Prince Harry have always been controlling of their brand. The leaked document for their speaking work highlights this.

That Prince Harry and Meghan Markle will go to extraordinary lengths to control the media narrative regarding how they’re portrayed is no secret.

If the couple isn’t dishing out legal threats to try and quash freedom of speech in the media, they’re announcing their intentions to only work with media outlets that give them a relatively easy ride.

This obsession with controlling how Brand Sussex is depicted was one of the major gripes Prince Harry and Meghan had with royal life.

The royal family has a way of working with the media that allows for a certain level of transparency, which isn’t suited to the Hollywood Royals.

They tried their best to make changes that would suit them, but those at the Palace quite rightly slapped them down.

We’ve already seen the way Prince Harry and Meghan Markle want to be portrayed in the public eye.

A quick skim through Finding Freedom lets you see the kind of candy floss, curated image that the couple is aiming for.

On the surface, they’re quick to provide their gullible audience with a “by the numbers” woke speech on Zoom, while behind the scenes, they’re cynically demanding that photographers work to a strict agenda and that charitable ventures run any social media mentions of the couple past their PR team and have photos greenlit before use.

The organic, natural charitable antics they love to leak to their friends in certain media outlets are anything but that. Everything is carefully choreographed down to the last second for maximum benefit to Brand Sussex, which is really Brand Meghan.

Watch as Harry and Meghan give a speech via Zoom! 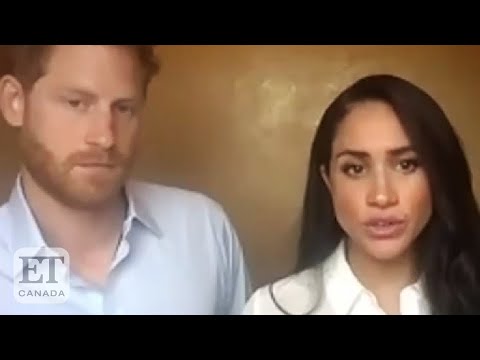 A cynic I may very well be, but I’ve never bought into Meghan Markle and Prince Harry and their sudden interest in being social justice campaigners for the great unwashed.

After all, it’s hard to take a lecture seriously from someone on discrimination and being disadvantaged when she enjoyed a $40 million wedding, a yearly budget of $1 million for clothes, and can snap her fingers for a team of servants to pamper her.

I don’t care what race you are. If you’re living that kind of life, you’re not facing any real-world problems.

However, I do not doubt that there’ll be a whole bunch of companies who care and know just as little about the social topics of the day willing to pay handsomely to have the Hollywood Royals lecture an elite group of attendees.

The idea of a couple of spoiled millionaires telling an audience of predominantly wealthy white males how race-relations and discrimination works is laughable.

Especially when Prince Harry and Meghan are doing it purely for the exorbitant fees they’ll demand. As for the blue-chip client? They’re taking part purely as a box-ticking exercise to make sure they’re front and center when the “Black Lives Matter” crowd asks who’s taking a knee or “educating themselves” adequately.

The Telegraph recently published information from a four-page request form for companies who wish to employ Prince Harry and his wife’s speaking services.

The list of demands is staggering. Full details can be found in the Telegraph article. Some of the more notable stipulations include a full audience list and a thorough vetting of event sponsors and even past speakers.

Both Prince Harry and Meghan will have full say over who introduces them and who moderates the event.

There has been no brand-controlling stone left unturned.

This level of total authority is undoubtedly Prince Harry and Meghan Markle’s idea of Nirvana on earth.

The control the Sussexes couldn’t secure while operating in royal circles is now available to them. Their deluded followers couldn’t be happier, lapping up the heavily curated version of Harry and Meghan.

The question is, for how long will companies happily hand over hundreds of thousands of dollars to hear the same claptrap many of us heard on Zoom calls? And will said companies be happy to acquiesce to the demands placed on anyone wanting to hire Harry or Meghan?