In the latest laughable attempt by Prince Harry and Meghan Markle to push themselves as self-styled social justice warriors, “simply” Harry penned a 1,400-word article blasting the current digital landscape.

You have to hand it to this couple–they’re on a different level when it comes to playing the victims and portraying themselves as martyrs.

I would take Prince Harry a little more seriously if his wife, Meghan Markle, and her ruthless bully friends hadn’t been guilty of manipulating the media for years. Or if both of them weren’t taking part in Zoom calls with a confessed internet bully and troll.

I could get behind Prince Harry and his campaigns for civil rights and racial justice if he acknowledged his shady past when it comes to race.

I know the Sussex Squad are oblivious to anything that Prince Harry or the royals did pre-2016. Still, a little research would tell you that Prince Harry is far from the type of individual that should be lecturing about anything to do with race relations or civil rights.

Again, people make mistakes, and I’m all for second chances, but the younger Prince is akin to an opinionated vegan who preaches down to the masses, but only a few years ago would dine on hamburgers and steak regularly.

Since he and Meghan embarked on their latest brand strategy to position themselves as a cross between Bob Geldof and Mother Teresa, he has been quick to demand that others acknowledge their past and have “uncomfortable conversations.”

Why not lead from the front, Harry? Let’s see 1,400 words on your “uncomfortable” past? A time when you weren’t the enlightened source of wisdom that you seem to be today?

I won’t hold my breath waiting on that happening. 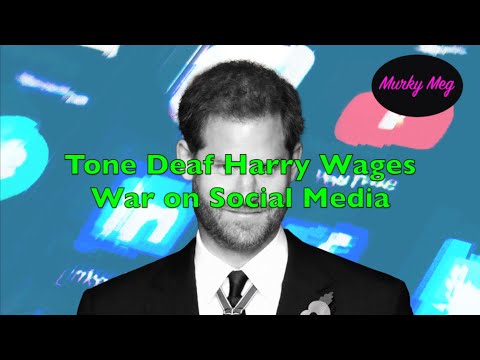 Prince Harry Wants a Digital Landscape Defined by Compassion Over Hate? Then Lead by Example

The Sussex Squad and other Meghan Markle and Prince Harry followers are a curious bunch.

On the one hand, they raise money for charitable causes, which is a good thing. Yet, they carry out campaigns of hate and bullying against journalists and anyone who doesn’t follow their narrow view of how their idol should be discussed on social media.

Trust me, I know. I’m one of those journalists.

Prince Harry commented in his tirade:

Our hope is that it’s the beginning of a movement where we, as people, place community and connection, tolerance and empathy, and joy and kindness above all. The internet has enabled us to be joined together.

How can he say these things while not only sitting idly by and allowing his and Meghan’s fanbase to wreak havoc online but actively engage with these people via Zoom calls?

Hypocrisy and Double-Standards Abound With This Hollywood Couple

Once again, this is an instance of Prince Harry urging people to follow what he says, but pay little attention to what he does. It reminds me of the Travalyst debacle where he preaches about saving the planet yet flies his family around on private jets.

The hypocrisy of this couple is astounding. It’s at such a stage that I’m seriously wondering if they’re oblivious to their actions.

No, while there will be those who are impressed by Harry’s carefully curated words, I’m not buying what he or his wife is selling.

Meghan Markle has used underhanded tactics to control the media narrative for a long time, in my opinion, and much of that will come to light in her ill-fated court case against ANL.

I do not doubt that the Hollywood Royals and their minions will frame such a scenario as Harry and Meghan being the victims of a biased media yet again.

Prince Harry needs to get his own house in order before preaching to others. His fanbase is among the most hateful on the internet.