Two months before officially announcing his presidential campaign, Pete Buttigieg appeared on MSNBC’s Morning Joe, selling himself as a generational and transformational presence in national politics.

Not only could Buttigieg, 37, drive turnout among millennials, still the Democratic party’s most untapped base of likely supporters, but the mayor of South Bend would bring a movement of cross-sectional voters along with him, too, refusing to kowtow to establishment fears while pushing for an aspirational brand of progressive populism.

Buttigieg was the Democrats’ hottest candidate by the time his campaign kicked off in mid-April, rising from true anonymity to a top-six place in the national polls. Though his momentum in the interim has been more tumultuous by comparison, he nevertheless entered Tuesday’s debate behind Elizabeth Warren, Joe Biden, and Bernie Sanders as the next most likely candidate to be the Democratic nominee.

But after an unabashedly combative debate performance, Buttigieg has run the risk of not only alienating the most prideful subset of the party electorate, but also opening himself up to accusations of hypocrisy from some of the early supporters who helped elevate him to legitimacy.

He literally scolded Castro for doing the same thing during the last debate. Pete is a hypocrite and is nearly unrecognizable from the smart nice guy I thought he was when he joined this race.

Buttigieg’s strategy of attacking liberal front-runners and leftward policy proposals wasn’t hard to see coming. He’d been previewing it since September, most notably of late when he characterized Beto O’Rourke‘s proposed assault weapons buyback as “confiscation,” a common right-wing talking point, and criticized Elizabeth Warren’s pledge to continue shirking big-money fundraisers should she advance to the general election.

“[Trump] has tremendous amounts of support and allies at his back, and we’re not going to beat him with pocket change,” Buttigieg told SnapChat’s Peter Hembry.

His dismissal of grassroots donations didn’t just ring hollow because Warren and Bernie Sanders, also bypassing high-dollar donors, led the Democratic field in third-quarter fundraising, but because he voiced vehement support for ridding pay-for-play influence in Washington over prior months, proposing a constitutional amendment to overturn the Supreme Court’s 2010 Citizens United decision.

Buttigieg’s evolution on healthcare policy is similarly insincere, and it begs to wonder how much influence the wealthy donor class, of which he’s a favorite, has over his policies. The candidate who in February dubbed Medicare For All a “compromise position” between the right and left is now running attack ads against Warren and Sanders, both in favor of eliminating private insurance, that describe their position as “further polarizing” Americans.

Pete Buttigieg hitting Bernie Sanders & Elizabeth Warren in new Facebook ad campaign on M4A: "Medicare for All Who Want It will create a public alternative, but unlike the Sanders-Warren vision it doesn’t dictate it to the American people and risk further polarizing them." pic.twitter.com/tRhkWe1ZUd

Buttigieg was even more frank during Tuesday’s debate, equating the Warren campaign’s overarching message with “infinite partisan combat.” How that accusation contrasts with his past comments about Republicans “cloaking” hard-line immigration policy through a hypocritical embrace of religion is a dynamic only Buttigieg seems qualified to understand. 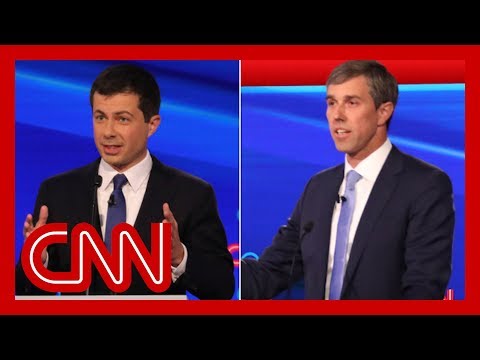 Buttigieg’s heel-turn toward the center, away from the progressive bedrock on which his campaign was initially built, makes sense from a polling perspective – at least on the surface. If Biden’s level of support is most tenuous among the three leading candidates, it stands to reason that poaching some of his bloc is Buttigieg’s surest path to the nomination.

But in Iowa, where Buttigieg polls strongest, the latest data indicated he pulled more support from very liberal voters than moderates.

Is this the point where I point out that Buttigieg actually pulled more from the very liberal than the moderate in our last Iowa poll? Ideology explains some but far, far from all support in this primary.

The dichotomy between the makeup of Buttigieg’s newest Iowa supporters and his attacks on Warren and Sanders is indicative of his self-serving place on the ideological spectrum. Will voters trust that he’s evolving with public opinion to ensure the party elects a nominee best-suited to beat Trump, or be wary of the rank opportunism that’s caused other ascendant politicians to fall from grace?

Either way, the biggest problem for Buttigieg now is that both liberal and moderate Democrats have more reason to doubt him.