With brother Peyton and wife Abby watching on in Philadelphia, the New York Giants’ Eli Manning took to the field to replace the injured Daniel Jones on Monday Night Football against the Eagles. After showing an early spark, Manning’s comeback dream faded as his defense collapsed and his receivers went missing in the storm.

Faced with some wild weather conditions that included torrential rain and wind, consistent offense was always going to be a struggle in the slick conditions. Eli Manning got off to the better start with some up-tempo offense that resulted in a neat 35-yard touchdown to New York’s break-out receiver Darius Slayton. From there, Manning went from strength, eventually throwing for 179 yards and two touchdowns with zero turnovers in the first half.

It was after this moment the music stopped for Eli Manning.

Giants Melt in the Rain Against 4th String Eagles

The second half saw the Giants opt for an extremely conservative game plan, predicated on the fact that Carson Wentz’s offense couldn’t seem to do anything. This meant a lot of carries for Saquon Barkley to grind away the minutes as the rain intensified, making the passing game tough to execute.

This backfired as Philadelphia managed to get things clicking late in the 4th, tying things up at 17-17 after finally stringing two decent drives together. With New York’s defense evaporating, an overtime touchdown for a completely uncovered Zach Ertz ended a miserable game in favor of the Eagles. 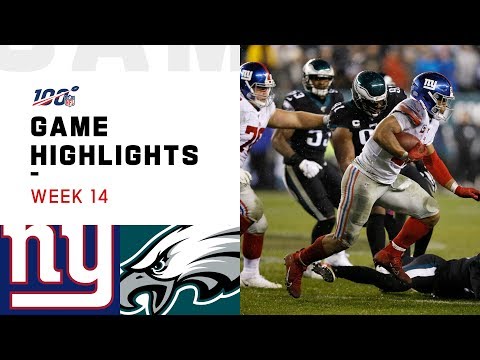 At one point, the Eagles had five straight possessions where they failed to move the ball 10 yards (excluding one roughing the passer penalty). Combine this kind of offensive impotence with one of the league’s weakest secondary defenses and against any other team, and the Eagles wouldn’t have had a chance. Injuries to starting receivers Agholor and Jeffrey threatened to destroy their season once and for all. The fact the Eagles won astonishingly keeps their playoff hopes alive.

After a stunning debut earlier in the season, Daniel Jones (or Danny Dimes as he was labeled) reinvigorated interest in a struggling Giants franchise. Unfortunately, since then, he has accumulated 15 fumbles and 11 interceptions. Jones’ multi-week injury couldn’t have come at a worse time, as the Eagles and Dolphins presented two struggling defenses for him to regain his confidence as well as his coach’s.

Whatever public perception might like to say about Eli Manning, his two Super Bowl MVPs (and wins) show he has a knack for the big occasion. This was clearly on display against a lifeless Eagles team in the first half. Had Eli put a similar performance together in the second half on Monday and then against an improving Dolphins team next week, it might have been a long time before Daniel Jones saw another regular season start.

Eli Was Good, He Needed To Be Great

As it stands, the Giants have too much invested in Jones to resurrect the era of Eli. While Manning can still contribute, one half of solid play against one of the worst defenses in the league is not enough to build a franchise on.