Nintendo is set to weather another round of criticism surrounding the widely reported drift defect affecting its controversial Switch Joy-Con controller as a class action lawsuit gathers steam.

After urging affected customers last week to come forward with their experience of the drifting issue and join the suit, US law firm Schwartz Kriner & Donaldson-Smith (CSK&D) has seemingly gathered enough ammunition to move forward.

Had a Switch for 2 months now, and both Joy-Con sticks experiencing drift already! NEVER have I had controllers start failing so fast. For $80 controllers, these things should be flawless…#NintendoSwitch #JoyConDrift

The firm confirms it filed the lawsuit against Nintendo in the United States District Court for the Western District of Washington on Friday. CSK&D claims the Joy-Con controllers are defective and Nintendo refuses to recognize the issue as such.

Representing plaintiff Ryan Diaz, CSK&D is looking to take the suit to a jury trial to obtain:

“monetary relief for damages suffered, declaratory relief as to the parties’ rights under Defendant’s warranty, and public injunctive relief.”

The drift, a widely accepted colloquialism for the defect, affects the thumbsticks on the Joy-Con causing them to automatically register ghost movements although there’s no physical input from the player. The analog sticks then “drift.” The repercussions on the gaming experience are troublesome, if not severe, as games requiring exact, not to say, timely input from the player become near-on unplayable.

Reports of the issue date back as far as the launch of the Nintendo Switch in March 2017. Countless horror stories pepper popular gamer haunts like Reddit describing a steady decline in functionality that, in worst-case scenarios, make the controllers entirely unusable.

Theories abound surrounding what is causing the defect. The most likely one is an issue with the seal allowing dust particles to gather below the thumbsticks. Another possible culprit is the design of the contact pad that is particularly susceptible to rapid wear and tear due to the fragility of the parts.

No Solution in Sight from Nintendo

The issue is so widespread that enterprising retailers have taken it upon themselves to ship out bundles with the components purportedly needed to fix the drift. A growing catalog of YouTube videos claiming to provide a fix have also surfaced with hundreds of thousands of views. 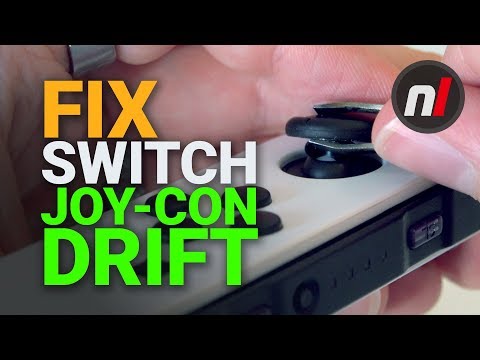 Nintendo’s lack of a robust solution is apparent.

The company requires players to pay the postage costs to have their Joy-Cons shipped for repairs but invariably encounter the same issue once again only months down the line. That is, if the console is still under warranty. If not, the prospect of forking out $79.99 for a new Joy-Con pushes owners to attempt repairs themselves with mixed results.

Nintendo has yet to comment on the growing controversy or provide a long-term solution for the hordes of affected Switch owners.

Shipping out replacement units would be of little solace as these would be plagued by the same defect later down the line, necessitating further callbacks. With the recent news that Nintendo plans to ship out two new models in the coming months, there are fears the same drifting defect will burden the Switch Lite and the updated Switch.

A redesign of the thumbstick mechanism looks to be the most viable solution, or at the very least, Nintendo needs to invest in better quality parts. News of a class-action lawsuit with undeniable merit should push the gaming giant to do just that.