Earlier this week, Epic Games permanently banned popular seventeen-year-old Fortnite streamer/YouTuber FaZe Jarvis for using aimbot cheats in a series of videos. The move sparked outrage on both sides of the argument. Fortnite’s most famous face, Tyler ‘Ninja’ Blevins, jumped in to give his two cents on the ban. 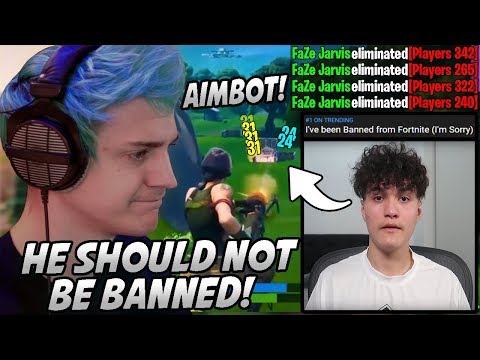 In a stream broadcast on his new Mixer home, Ninja argued that the permanent ban was too extensive for a content creator, whose livelihood depends on playing Fortnite. His logic goes; remove access to the game, and the creator can pull the curtain down their career.

He had these choice words to say about Jarvis’ ban;

There’s a difference between a content creator who has millions of subscribers, who then gets banned from what makes him money, and some kid who is just a piece of **** who has zero followers, zero money from gaming and hacks.

He argued that content creators should have carte blanche and operate free of consequences. For any person with a modicum of common sense, the flaws are all too apparent, not to speak of the inherent responsibility these streamers have to provide a good example to the hordes of young viewers who follow their every move.

The push-back for what is widely deemed a naive take on the situation has been severe for the streamer. So much so, that Ninja posted the following Tweet late last night when lambasted by a fellow streamer tehMorag for his comments. He has seemingly seen the error of his way and admits he was wrong.

While the debate over Jarvis’ fate chugs along, Epic Games is unlikely to rescind the ban. The Fortnite publisher provided the following comment to TMZ when pressed on the matter;

We have a zero-tolerance policy for the usage of cheat software. When people use aimbots or other cheat technologies to gain an unfair advantage, they ruin games for people who are playing fairly.