Many Americans and consumers were mystified by Nike’s embrace of the political lightning rod that is the former NFL quarterback Colin Kaepernick. Yet it appears that just as many were delighted by it.

Nike embraced the SJW movement after enlisting Colin Kaepernick to be the face of its 2018 “Just Do It” campaign and highlighting other athletes for its social and political contributions and pet projects.

The latest sign that the elitists approve of this approach is the Emmy nomination handed to Nike’s “Dream Crazy” commercial, with Colin Kaepernick’s voiceover.

The commercial is undoubtedly inspiring and delivers a solid and positive message.

Yet it ran the risk of being a double-edged sword. Using politically charged people or issues is almost certainly going to alienate half the seller’s consumers.

Using Colin Kaepernick as both the face and voiceover of the commercial appears to have turned Nike’s way, proving that any publicity is good publicity.

But The Campaign Doesn’t Even Make Sense!

What’s particularly baffling about Nike’s Colin Kaepernick campaign is that it doesn’t actually make any sense. While the commercial says, “It’s only crazy until you do it. Just do it,” another ad shows Colin Kaepernick’s face and the words, “Believe in something. Even if it means sacrificing everything.”

Colin Kaepernick took a knee during the national anthem at NFL games. He was criticized for allegedly hating America. Apparently, sticking to his guns by repeatedly kneeling was the something he believes in.

This didn’t result in a sacrifice. That is unless one chooses to believe that Nike’s intended subtext is that doing so cost him his NFL career as opposed to him just being a second-rate quarterback (which he was).

One must wonder what the effect on Nike’s sales would have been if his face had been replaced by the face of a soldier who had lost his limbs in combat or a police officer who died trying to save someone. It would generate more sales than a cryptocurrency announcement did.

So what tangible effect has Colin Kaepernick had on Nike stock?

Unless one is a high-end data analysis firm, it is impossible to quantify what effect any given ad campaign has on a brand.

Except in rare cases like “New Coke,” in which negative effects occur immediately, it’s difficult to say if a given campaign adds or subtracts to a company’s revenue.

We know Nike’s revenue increased from $34.35 billion to $39.1 billion in the past two years, a total increase of 14%. Profits have been flat, thanks to increased marketing expenses and cost of revenues.

One may be tempted to believe that if Colin Kaepernick were a detriment to the brand, Nike would have excised him. Yet that’s not always the case with corporations.

Despite ample evidence that moviegoers do not like political (particularly left-wing) subtext to their films, Hollywood never seems to learn that lesson.

So is Colin Kaepernick helping or hurting Nike stock? The truth is that his impact is probably negligible, as those who align themselves with his messaging offset those who are turned off.

That being said, Nike knows that controversy sells. 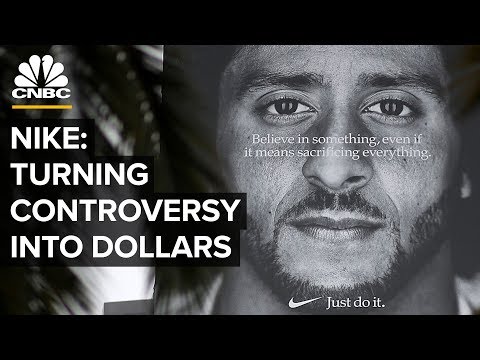 Earnings Are All That Matter

What matters to Nike stock is its earnings growth, and with $39 billion in revenue, any given ad campaign is a drop in the bucket.

What we do know is Nike stock is valued at $137 billion on $4 billion in trailing net income, or 34x earnings.

With earnings growth expected to increase at 15 percent annually for the next few years, and attaching a premium for Nike’s world-class brand name and regular cash flow, Nike stock is still about 30 percent overpriced.