Morgan Stanley is shelling out $0.9 billion to acquire stock-plan firm Solium Capital. The acquisition of the firm that mainly specializes in offering Software-as-a-Service for managing employee share plans, ‘financial reporting and compliance’ is expected to bolster Morgan Stanley’s wealth management business. This is the biggest acquisition that the bank has made in the last decade.

Solium boasts of 3,000 stock plan clients, nearly 10 times more compared to Morgan Stanley. Some of Solium’s clients include tech startups such as Stripe and Shopify.

Morgan Stanley is Banking on Young Clientele for its Future

With the tech sector employing younger workers on average compared to other industries, Morgan Stanley is hoping the acquisition will help it reach a younger demographic, according to the firm’s CEO, James Gorman:

The acquisition provides Morgan Stanley with broader access to corporate clients and a direct channel to their employees, as well as a greater opportunity to establish and develop relationships with a younger demographic and service this population early in their wealth accumulation years.

Per the Wall Street Journal, Morgan’s existing stock-plan business has been focusing on senior executives as opposed to the rank-and-file. With the acquisition, the bank will be able to serve younger employees at startups who avoid traditional financial firms.

Morgan Stanley will acquire all of Solium’s issued and outstanding common shares at CAD 19.15 a share, a 43% premium. Solium is listed on the Toronto Stock Exchange.

The acquisition will not change Solium’s operating structure, however. Solium will still be headquartered in Calgary, Canada.

Morgan Stanley expects to close the deal in this year’s second quarter. This will be subject to customary closing conditions such as ‘court, Solium shareholder and regulatory approvals’.

According to the Journal, regulators are unlikely to be a stumbling block in this case. This is because Solium Capital as a bank’s acquisition target would be considered a ‘steadier, less risky’ business.

Not Resting on its Laurels

Though the acquisition of Solium is the biggest for Morgan Stanley since the global financial crisis over a decade ago, it does not come as a surprise. While releasing Q4 and full year 2018 results, Gorman indicated that the bank was ‘well positioned to pursue growth opportunities’.

Those results demonstrated that Morgan’s Wealth management division needed a shot in the arm. In 2018’s Q4 the division’s revenues were lower relative to a similar period in 2017. Revenues in last year’s Q4 came in at $4.1 billion while a year prior the figure was $4.4 billion. The acquisition of Solium Capital could place the division back on a growth trajectory. On its website, Solium Capital says it has ‘posted 15 straight years of revenue growth and profits’. 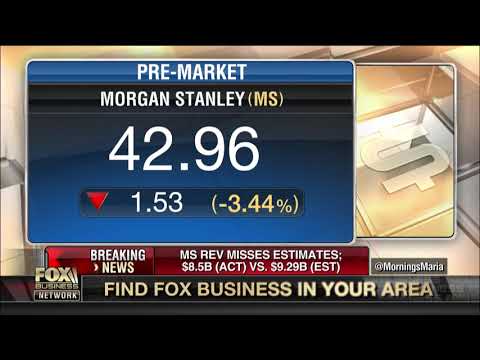