Despite being a gimmick, Microsoft's custom-themed Xbox One X bundle is a fitting homage to Gears 5 that sure looks the part. | Source: Christian Petersen / Getty Images / AFP

To mark the upcoming of Gears 5, Microsoft revealed today a custom themed Xbox One X bundle. And despite being a gimmick to lure in fans of the franchise, it’s hard to argue that it doesn’t look the part.

Dubbed the Xbox One X Gears 5 Limited Edition Bundle, it features a 1TB console, a limited edition Kait Diaz wireless controller, and Gears 5 Ultimate Edition. Microsoft has gone the extra mile and is throwing in copies of Gears of War Ultimate Edition, Gears of War 2, 3, and 4 as well as one-month Xbox Game Pass and Xbox Live Gold subscriptions plus a couple of in-game skins. 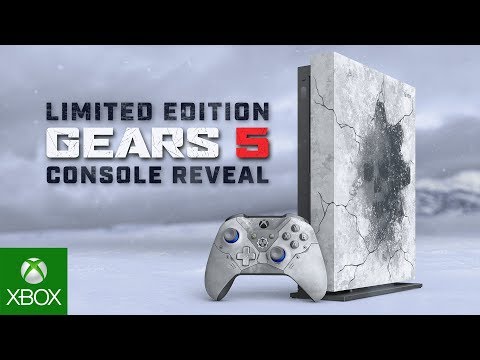 Interested parties should aim to fork out $499 for the pleasure of receiving it exactly a month from now on Sept. 6, four days before Gears 5 officially hits store shelves. The sheer extent of what the bundle contains helps dampen the steep price quite nicely. Pre-orders are now open over Microsoft’s Xbox portal.

For those who want to deck out their entire setup, Microsoft has also enlisted the help from Controller Gear to offer an officially licensed charging stand. Razer has stepped in with a Gear 5-themed wireless headset as well as a keyboard and mouse combo. Finally, Seagate is shipping both a 2TB and 5TB Gear 5 game drive.

A Worthy Homage to Gears 5

The Xbox One X itself is a sight to behold and is the fruit of a collaboration between Gears co-creator and studio head at developer The Coalition, Rod Fergusson, and the Xbox industrial design department. Although we’ve only been privy to screenshots at this point, the dedication with which both parties have gone about crafting this stunning special edition is apparent.

Adorning the top panel is the Gears franchise’s signature Crimson Omen skull glaring menacingly from below a sheet of snow powered ice. Laser-etched cracks snake out to the extremities hinting at an untold menace on the cusp of escaping. On the undercarriage, owners will find the standard console’s classic matte finish in grey rather than black, stamped with the Locust Horde emblem covered by a smattering of snow dust.

As for the controller themed around Gears 5 protagonist Kait Diaz’s armor, the sharp design of the textured trigger grip and rubberized diamond grip complement the icy, weathered overall look of the casing framed around a shaded Fenix Omen symbol.

Yes, It’s a Gimmick but a Damn Good One

It’s easy to brush off custom game-themed consoles as a thinly veiled marketing ploy on the part of manufacturers, and I for one am an avid fan of the sleek aesthetic of the standard edition Xbox One X. But, perusing the marketing material for the Gears 5 Xbox One X, it’s difficult not to be drawn. The design is a stunning and fitting homage to the Gears franchise.

The timing is especially apposite given the arrival of Microsoft next-gen Project Scarlett at the tail end of next year. This one’s incontestably for the collectors. The Gears 5 edition may very well be the last time Microsoft ever spices up its Xbox range and is the only other Xbox One X model other than the existing one currently on the market.

Hats off to Microsoft and The Coalition for knocking this one out of the park.