Many analysts are not happy with Microsoft’s planned buyout of TikTok’s U.S. business. But there are plenty of reasons to justify the acquisition.

First, the concern that Microsoft is buying TikTok to obtain user data is moot, argues Stanford Internet Observatory’s Alex Stamos. Second, it strengthens the position of the U.S. amid various trade discussions with China.

Microsoft confirmed talks to purchase TikTok in the U.S. after the Trump administration said it would ban TikTok.

Microsoft is Pushing TikTok Acquisition, And It’s Not About Data

When the tech giant first announced that it has open talks with ByteDance, analysts heavily condemned the move.

Is Microsoft buying TikTok really a solution? Because you think Microsoft is trustworthy?

This is wonderful news for privacy concerns, with Microsoft behind TikTok there will be no users left on the app to gather data from.

But tech researcher Alex Stamos explained that user data is not the factor that is pushing Microsoft to acquire TikTok.

Microsoft is the most important company in global enterprise tech and a US champion. They are already sitting on the mail of most US business, 10,000x more valuable than TikTok data… They are building $10B in cloud infrastructure for the Department of Defense If you think Microsoft is doing the bidding of the PRC with the data of Americans, I got some really bad news for you.

There is an argument that the user data of Americans are safer in the hands of a U.S. company. Microsoft already has a significant amount of user data, and researchers argue additional data from TikTok would not bring immense value.

Strengthens the Position of U.S. in China Talks

Atop the contested arguments about user data, some say that the Microsoft-TikTok deal would send a strong message to China.

If Microsoft buys TikTok, it shows President Trump’s tough stand against China has won again. This deal would protect Americans’ data, increase competition, and secure a creative platform for millions of users.

It would show that U.S. President Donald Trump maintains his position against China amid the ongoing trade talks. The U.S. is not bluffing when it says it would ban or restrict Chinese businesses within the country. 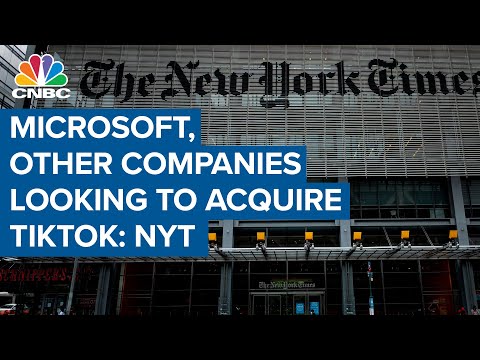 But there are clear risks facing the U.S. in banning TikTok and allowing a U.S. business to take over. The most glaring threat is that China could issue countermeasures against U.S. businesses in the near-term.

Whether ByteDace would sell its U.S. business to Microsoft remains uncertain. Regarding the situation, ByteDance CEO Zhang Yiming said:

Even though we’ve repeatedly stressed that we’re a privately-run business… CFIUS (Committee on Foreign Investment in the United States, a U.S. interagency committee) still believes ByteDance has to sell the TikTok US operation. We do not agree with this decision.

ByteDance executives were seemingly trying to find a way to maintain the company’s business in the U.S. Eventually, on August 2, ByteDance reportedly agreed to divest U.S. operations.