Well, I don’t know about you, but I can sleep nights once again after learning that Meghan Markle does not want to be United States President.

Honestly, the whole matter had been playing on my mind, so the fact that someone reportedly close to the Duchess of Difficult has now confirmed that politics isn’t in Meghan’s future, I’m able to breathe a sigh of relief.

The above is sarcasm, for those who haven’t clicked by now.

Seriously though, the fact that this was ever a semi-serious question is laughable.

Meghan Markle in politics? Much less running for president? Pu-leeeze!

It’s one thing to wax lyrical about women voting and to offer thinly-disguised support for Democratic candidate Joe Biden, but it’s another thing entirely for an individual to take that step into politics properly.

Sure, President Trump is an example of what can be done, but despite him being criticized by many, he’s the exception rather than the rule. Not many could do what he has done, including Kanye West.

Speaking to Vanity Fair and reported by the Express, a source close to Meghan Markle claimed:

While there’s no denying she [Meghan Markle] is interested and engaged in politics as a topic, she harbors no ambition to enter a career in politics herself.

If true, there isn’t a lot wrong with that. People can be engaged in political matters without wanting to step forward as a candidate. 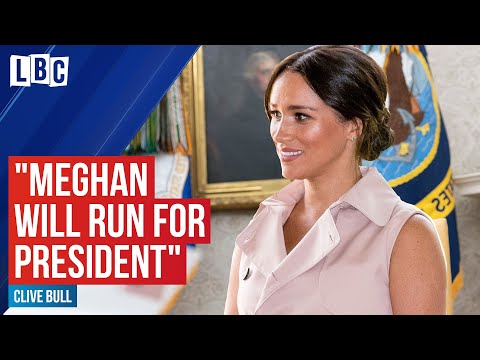 I’m not sure if it’s just a case of her “friends” messing with the media to gain coverage for Meghan Markle, or if they really believed Meghan was capable of such a thing, but it’s not that long ago that sources close to Meghan were claiming:

One of the reasons she was so keen not to give up her American citizenship was so she had the option to go into politics. I think if Meghan and Harry ever gave up their titles, she would seriously consider running for president.

While most of her friends and associates who made these laughable claims quite rightly refused to speak on the record, there was one source who wasn’t afraid to put his name to the ridiculous notion of Meghan Markle in politics.

She has her eyes set on the US presidency. Meghan is the embodiment of the American dream. One day we may see Meghan become president.

The only question I have is, was Meghan playing a joke on poor little Omid when she told him that? Or is this something he’s come up with on his own?

Regardless, it got a laugh out of me.

Meghan Markle has every right to be politically active

While many, including myself, have questioned the logic in Prince Harry discussing US politics, it makes perfect sense for Meghan Markle to do so.

I mean, she’s hardly the first semi-relevant “celebrity” to do so, is she? In fact, celebs who matter far more than she does have went down this road before also.

I still think that most of what she says is absolute nonsense, and I question how much she actually knows about politics in America, but as a US citizen, it’s her right to speak on the matter just as much as it’s my right to laugh at what she says.

Prince Harry should know to keep out of the deep end of this particular pool, though. He knows very little about British politics, never mind US goings-on.