Meghan Markle has spoken out once again, complaining of the “toxic” media and the way the truth isn’t reported. Her truth is what matters.

It seems that ant time Meghan Markle can find herself a platform, she’s pushing the same agenda.

The censorship of media. And taking little digs at the royal family.

It’s no secret that both Meghan and her husband, Prince Harry, have an issue with their coverage from the media.

Of course, if the tone of the content is complimentary, then that’s perfectly fine. But criticism is off-limits for the Hollywood Royals. 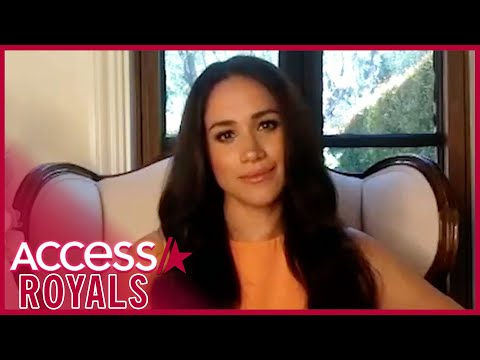 Meghan Markle advocating for the truth is laughable

Meghan Markle and Prince Harry claimed via an official spokesperson that they did not contribute to the Finding Freedom biography written by Omid Scobie and Carolyn Durand, only for the authors to contradict that claim.

So, you’ll have to forgive me if I take Meghan’s preaching on the subject of truth with a sizeable grain of salt.

There is so much toxicity out there in what is being referred to as, my husband and I talk about it often, this to the economy for attention. That is what is monetizable right now. So if you’re just trying to grab someone’s attention, you’re going for something salacious versus what is truthful.

Considering the entire premise of the Finding Freedom biography is built around rumors, gossip, and anonymous sources offering salacious little tidbits of hearsay, I find it remarkable that Meghan Markle can make such claims when her close friends are penning books that are designed to settle royal scores in such a manner.

Another claim that Meghan made during her interview with 19th News was that she had been somehow unable to “use her voice” during her time as a royal, commenting:

From my standpoint, it’s not new to see this undercurrent of racism and certainly unconscious bias, but I think to see the changes that are being made right now is really — it’s something I look forward to being a part of. And being part of using my voice in a way that I haven’t been able to of late.

I’d ask the question why Meghan Markle hasn’t used her voice of late? Is she insinuating that she would somehow be prohibited from raising issues around race by the royal family?

Those who follow the monarchy will know this to be absolute nonsense. Last year Prince William was very vocal about the subject, raising the issue of racism suffered by footballers Tammy Abraham and Romelu Lukaku, commenting:

People are now talking a little bit about mental health issues, but I imagine talking about racism is still quite a difficult subject, especially when it’s happening in such a public fashion with Premier League matches or [in the] Champions League. We’ve got to do something about it. I’m fed up with it.

William raised these issues long before it had become fashionable to take the knee before a game, and before corporations and sports organizations hijacked Black Lives Matter as a points-scoring exercise.

It’s perhaps worth noting that neither Meghan Markle nor Prince Harry was quick to add their voices to the issues raised by Prince William at the time.

Meghan’s input and voice would have been most welcomed, I’m sure, yet she offered nothing.

It’s blatantly clear that when it comes to the truth within the media, the only important thing is their truth.

As long as the Hollywood Royals are painted in a positive light, it doesn’t matter what’s true or not. For that reason, any preaching from Meghan Markle will continue to ring hollow among those who know better than to just buy into anything they say.

September 26, 2020 15 Comments
← PreviousMeghan Markle Could Be Forced to Take the Stand Due to Finding Freedom
Next →Elon Musk Doesn’t Need to ‘Beg’ for Trolls – We All See His Foolishness