Well, having heard some of what Meghan Markle had to say in her latest “powerful women” summit, it doesn’t take a detective to figure out what she’s been watching on her favorite streaming service of late.

We all know Meghan isn’t above incorporating certain aspects of others’ work into her speeches (Grey’s Anatomy, anyone?). In this case, her go-to resource is the latest headline-grabbing Netflix documentary. 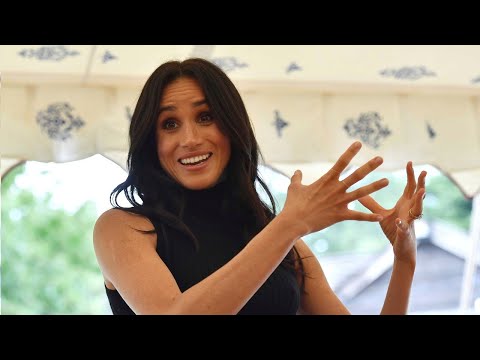 Much of what Meghan Markle had to say is far from innovative. In fact, it was a rather lazy rehash

The comparisons between drug addicts and social media enthusiasts are mentioned several times in the Social Dilemma, with one quote claiming:

There are only two industries that call their customers’ users’: illegal drugs and software.

In her speech, Meghan commented:

There are very few things in this world where you call the person who’s engaging with it ‘a user.’

Someone has been making use of that free employee Netflix account, I think!

“Something, algorithmically, is creating this obsession.”

Meghan, The Duchess of Sussex warns against the pitfalls of social media addiction during a conversation at the #FortuneMPW Next Gen Summit. https://t.co/hhyvMGAoyf pic.twitter.com/eKpB0U38AW

Seriously though, on this occasion, I think Meghan Markle is correct. Social media isn’t a great place, especially for young people who are still quite vulnerable mentally as they grow into adults.

So yeah, usually I’d agree with Meghan on this rare occasion, but there’s just a few little problems with what she said.

Social media is the virtual playground that her fanbase frequents

You have to assume that during all of the times Meghan Markle has thrown shade not just on social media platforms but also on users themselves, that she would include her own rabid fanbase in the equation?

And yet, for all of her moral preaching, she never once mentions the bullying and victimizing that we see from some aspects of her core support.

Now, I should mention that not all Meghan Markle fans should be lumped into the toxic circle. There are a lot of Meghan supporters who don’t condone such actions.

In fact, on many occasions, those Meghan fans who have tried to call a halt to the constant bullying and victimization of not just royals such as Duchess Kate Middleton, but also members of the British media, find themselves being attacked as well.

A specific section of the Meghan Markle fanbase, although incredibly small, is very vocal and operates in an almost cult-like manner.

I commend the Meghan Markle fans who raise money for charity and so forth. However, the toxic minority cannot be ignored.

Especially when the recognition it receives is coming from both Meghan and Prince Harry personally.

We cannot take anything Meghan has to say on social media and the toxic environment it creates seriously until she does some housekeeping of her own.

Meghan Markle claims she doesn’t know what’s out there. I think she does

Another interesting quote from Meghan relating to social media during her speech claimed:

I’ve made a personal choice to not have any account, so I don’t know what’s out there. And in many ways, that’s helpful for me. I have a lot of concerns for people that have become obsessed with it.

It may be true that Meghan Markle isn’t personally managing any social accounts, but let’s not pretend that she’s walking around completely unaware of what’s out there.

She does know what’s out there about her. It was only recently she wrongly claimed she was the most trolled person in the entire world.

The entire Meghan Markle brand revolves around people in the media and on social media talking about her.

If Meghan were no longer trending on Twitter, being discussed by media outlets, or mentioned on television, it wouldn’t be long before the money-spinning offers would quickly dry up.

Brand Meghan relies on the very thing that she’s claiming she wants to put an end to.