I have to admit, when I first heard about Meghan Markle and Ivanka Trump being somewhat friendly to each other, I wasn’t surprised.

In many ways, President Trump’s daughter epitomizes everything that Meghan Markle wants to be. And indeed what Meghan, in her own mind, believes she is.

Despite the bad rap she gets because of her father, Ivanka Trump is a formidable woman in her own right. Sure, she’s caught a lot of breaks because of her name, but growing up with the name Trump hasn’t been easy either, I’d bet.

So when Trump offered Meghan an olive branch back in the Tig days, Meghan quite rightly pounced upon it.

Meghan Markle uses people to get to the top. Which is what she’s done with Ivanka Trump

When Meghan Markle was throwing compliments at Ivanka Trump, referring to her as “staggeringly beautiful” and “intelligent” on her blog, it bordered on cringeworthy.

There’s no doubt that Meghan looked at Ivanka and saw everything she wanted to be.

Not only did Ivanka agree to help Meghan Markle with her blog, but according to royal biographer Andrew Morton in his book Meghan: A Hollywood Princess:

[Meghan was] more thrilled when she accepted her invitation to meet for drinks and dinner the next time Meghan was in New York.

Writing on her blog about meeting Ivanka for drinks, Meghan commented:

When we have drinks, I will make sure I order whatever she does – because this woman seems to have the formula for success (and happiness) down pat.

Video: Meghan Markle and Ivanka Trump have a complicated relationship due to Ivanka’s father, President Trump! 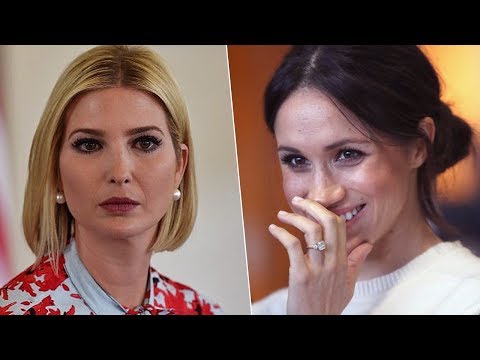 So why has Meghan had a change of heart towards Ivanka?

First of all, I have zero doubt that Meghan Markle still admires the hell out of Ivanka Trump. In fact, if anything, she probably admires her even more now considering the position she’s managed to work her way into politically.

Senior Advisor to the President of the United States?

I mean, we all know the woman is entirely in over her head, but that kind of small detail won’t matter to the likes of Meghan Markle. She was also in over her head the moment she married Prince Harry.

The truth is, Meghan has realized that Ivanka Trump is now counter-productive to the new brand she’s looking to sell to her fans.

Meghan Markle cares about one thing – her brand

We know that once Meghan Markle deems you surplus to requirements, you’re thrown away like yesterday’s newspaper.

It happened to Trevor Engelson, Cory Vitiello, her father, and even her BFF Jessica Mulroney’s children.

Craig Brown, a commentator writing for the Mail on Sunday had an interesting take on why the new biography, Finding Freedom, featured zero mention of Meghan’s history with Ivanka Trump:

The authors of Finding Freedom conveniently airbrush Ivanka from the record, perhaps fearful that the Trump formula for success and happiness might jar against Harry and Meghan’s new mission to ‘build a humanitarian legacy that will make a profound difference in the world.’

And this quote sums up Meghan Markle perfectly.

After seeing dismal failure in Hollywood and watching someone else snag that Disney+ contract, Meghan has suddenly become interested in her racial makeup and getting involved in progressive politics.

And just as she has many times before, she’ll completely reinvent herself and do her best to rewrite history.