Meghan Markle fans are known for being particularly nasty if they think their idol has been slighted. Edward Enninful is just the latest victim

I think it’s fair to say that I have experienced exactly how the infamous Meghan Markle fanbase works over the past six months or so.

It’s for that reason that I knew recent comments by British Vogue editor Edward Enninful was going to result in a social media storm of epic proportions.

And boy, was I ever right. 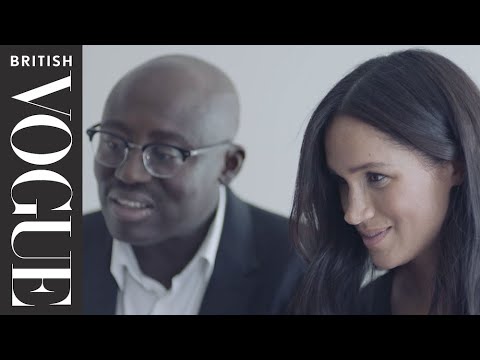 What did Enninful say that irked Meghan Markle fans so much? The truth!

So what exactly did Edward Enninful say that sent the Sussex Squad into a fit of rage?

While speaking to Sky News, he talked about Meghan Markle, her experience with the royal family, and if her treatment was racist:

The Duchess of Sussex is a brave woman. I feel that it wasn’t. Parts of it were probably racism, but it was more of an institution.

Enninful went on the say that the criticism that Meghan Markle received was, in his opinion, “harsh,” but that he “wouldn’t just blame it on racism.”

He also believes that Meghan may have found it tough understanding the many protocols and rules that exist within the machine that is the British royal family:

She walked into an institution, and everyone expected her to know the rules. And I think sometimes it takes a minute to understand the rules.

And perhaps most important of all, he concluded his views on the subject by saying:

She did get very unfair treatment, I thought.

Is it just me? I can’t see anything inflammatory in what Edward Enninful said about Meghan

That Meghan Markle fans see what Enninful said as a slight on their idol speaks volumes about them.

In fact, many of her fans are questioning him on his knowledge of what racism actually is.

As incredible as that may sound, it’s true.

For those who don’t know, Edward is a Ghanian-born fashion designer who is widely regarded as an influential figure in the communities of fashion, music, and Hollywood.

He’s the first black editor-in-chief of British Vogue and was named the 6th most powerful black man in Britain.

Not only that, but he accomplished all of this on his own. He didn’t marry a princess or step on people on his way to the top.

If you disagree and believe that racism was at play, then fair enough. You’d be wrong, in my opinion, but still.

The problem with Meghan’s fanbase, and the Sussex Squad, in particular, is that they can’t seem to disagree with someone without getting personal.

What Meghan’s fans have to realize is that while their idol was able to switch between ethnic profiles to suit the job she was after, Edward was out there living the life of a British-Ghanian immigrant in London.

As recently as July 2020, he was denied access to Vogue magazine offices in London by a security guard. He’s the editor-in-chief of the publication!

Questioning his knowledge of racism is, quite frankly, embarrassing. Enninful has lived that life, and is nothing but an inspiration to anyone, regardless of race, looking to make their mark in the fashion world.

Nothing that Edward said was offensive. He was calling it as it as he sees it.

If you don’t like it, then that’s on you.