Beer lovers, mark your calendars! Lucky Charms beer will be available for a limited run on March 2 in Norfolk, Virginia. Smartmouth Brewing Co. breathlessly announced the news on social media, where it promised to meld breakfast cereal with alcohol for a magically delicious experience.

“Remember how you used to sort through bowls of your favorite breakfast cereal to separate the marshmallows from the cereal?” Smartmouth wrote on its website. “Whether you ate them first or saved them for last, we’ve got you covered with our latest beer…the result is magically ridiculous!” 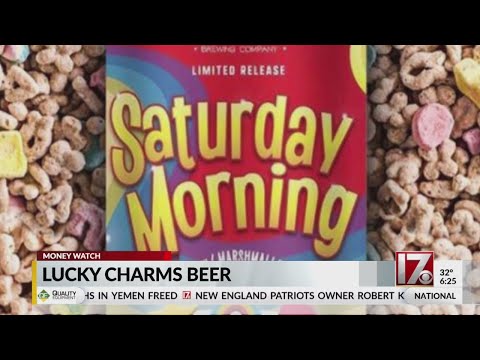 The Lucky Charms-flavored beer, called Saturday Morning, is  6.6 percent alcohol by volume and brewed with toasted marshmallows and dehydrated-marshmallow-bits.

It will be distributed throughout the state of Virginia to limited restaurants, bars, and specialty bottle shops. The comical public relations stunt is being both celebrated and mocked on social media.

Lucky Charms flavored beer? IDK about all this. pic.twitter.com/dKsHX9xr83

This Lucky Charms-flavored beer will take you back to your childhood 🍀 pic.twitter.com/Su74157kv0

Another Twitter user observed: “I want to be disgusted, but I am so curious.”

LUCKY CHARMS FLAVORED BEER. It’s brewed with actual marshmallows by @smartmouthbeer. I want to be disgusted, but I am so curious… pic.twitter.com/0BNV8xG2ea

A guy named Carl sarcastically snarked: “Yes, because as a child I often drank beer with my Lucky Charms.”

Yes, because as a child I often drank beer with my Lucky Charms https://t.co/bbA8RKFc8B

Lucky Charms is a popular cereal that has been manufactured by the General Mills food company since 1964. Last week, General Mills announced that it expects top-line growth for the fiscal year ending May 26, 2019.

In 2018, General Mills stock fell due to lower-than-expected operating results. In June 2018, the cereal manufacturer — which also owns the Häagen-Dazs ice cream and Betty Crocker food brands — announced that it would slash 625 jobs by the end of 2019.

General Mills said it needed to streamline operations in a move to reduce costs amid decreasing sales of its Yoplait yogurt amid rising freight expenses.

“We’re off to a great start here with Häagen-Dazs’ retail sales up double digits fiscal year to date. We’ll continue to grow the Häagen-Dazs brand with compelling global marketing campaign.”

Harmening also said he expects 2019 total sales to increase once the company launches several new products, including a high-protein yogurt with less sugar.

However, a Wall Street consensus of 17 analysts expects General Mills to report earnings of 69 cents a share on revenue of $4.2 billion for the third quarter ending Feb. 28.

In the year-ago third quarter, the company earned 79 cents a share on revenue of $3.9 billion. General Mills will report its Q3 earnings on March 20.