Lady Colin Campbell is at it again.

The sworn enemy of Meghan Markle has just released a statement swearing that the Duchess of Sussex not only “played Prince Harry like a piano,” but she single-handedly destroyed everything and anything he loved and stood for.

These accusations are bad enough on their own. But coming from a known liar like Campbell, they become particularly galling — and creepy.

Are We Still Pushing This “Meghan Markle Is A Black Widow” Nonsense?

So-called “royal biographers” can’t seem to make up their minds. They alternate between claims of Meghan Markle being either the most powerful woman in the world — able to destroy an entire royal family by luring a minor royal away from his loving hearth and home — or she’s a jealous, petty weakling who wanted to be the Queen of England, then stomped off back to America when she didn’t get her way.

For Lady Colin Campbell — the woman who famously called Princess Diana a “fake victim” and bullied a talk show host into “coming out” long before he was ready to do so — the Duchess of Sussex is a combination of both these things. Just listen to the tale she spins:

And as you can see in the video below, Lady Colin Campbell loves trash-talking the Duchess of Sussex every time a camera lens is trained on her. 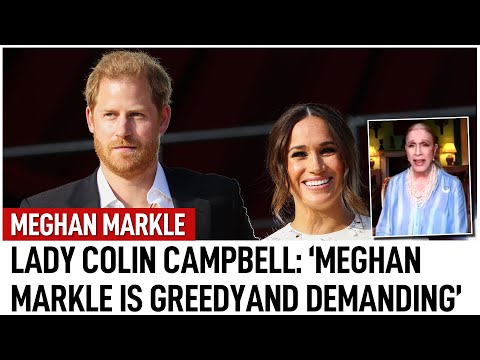 ‘Lady’ Colin Campbell Has Never Met The Duchess Of Sussex

Despite her various vicious diatribes against her — from calling her “cheap” and “vulgar” to stopping just short of using racist invective to describe the half-Black Duchess — ‘Lady’ Colin Campbell has never met Meghan Markle.

She’s also not really a “Lady.” In 1974, she married Lord Colin Campbell, the younger son of the eleventh Duke of Argyll. But they divorced only 14 months later, and her “title” is one of courtesy, not of the designation of nobility.

What’s more, even though Campbell was right about Princess Diana’s troubles in her marriage to Prince Charles, she was ultimately dismissed as a “fantasist” by those who are truly in the know about the British royal family. Remember her outrageous claims about the Queen Mother? Twitter certainly does — and they have no problem calling her out for the rubbish she continues to pedal.

So, why are we so quick to believe her claims about Meghan Markle?

Her obsession with the royal family in general — and the Duchess of Sussex in particular — is borderline creepy and seems to have no basis in fact. She shouldn’t be automatically believed just because she panders to the British public’s worst opinions about Prince Harry’s wife.