By CCN.com: The Dow and broader US stock market struggled to sustain any positive momentum on Wednesday, as key health-care stocks flirted with their worst declines of 2019. The culprits? “Medicare for All” and its would-be harbinger, Bernie Sanders.

Health-Care Stocks Plunge by $28 Billion on Tuesday, and the Sell-Off Isn’t Over Yet

Bloomberg data indicates that health insurance companies and hospitals lost a staggering $28 billion in market value on Tuesday after UnitedHealth Group CEO David Wichmann warned that the Medicare for All bill favored by Bernie Sanders and other top Democratic lawmakers would completely “destabilize” the US health-care system.

“And the inherent cost burden would surely have a severe impact on the economy and jobs — all without fundamentally increasing access to care,” Wichmann said, just hours before UNH shares closed more than 7 percent off their session highs.

That wasn’t an isolated development. Health-care stocks have cratered in 2019, even as the S&P 500 and Dow Jones Industrial Average have plowed toward new all-time highs.

Nor did investors come to their senses after the bell.

UnitedHealth stock plunged another 2.81 percent on Wednesday, dragging the Dow Jones Industrial Average into negative territory despite a solid open. Health-care stocks fell more than 2.5 percent, which CNBC notes has the sector on track for its worst decline since January 3.

Critics might argue that what goes around comes around for companies who choose to sound off on the political debate. However, Bernie Sanders called UnitedHealth out by name in an April 12 tweet, boasting that “When we are in the White House your greed is going to end.”

“Our message to Steve Nelson and UnitedHealthcare is simple: When we are in the White House your greed is going to end. We will end the disgrace of millions of people being denied health care while a single company earns $226 billion and its CEO makes $7.5 million in compensation.”

Our message to Steve Nelson and UnitedHealthcare is simple: When we are in the White House your greed is going to end. We will end the disgrace of millions of people being denied health care while a single company earns $226 billion and its CEO makes $7.5 million in compensation. https://t.co/OafOIT92H9

Bernie Sanders Has Every Incentive to Hamstring Key Dow Components

A cynic might argue that Bernie Sanders’ war on UnitedHealth is as much tactical as it is the product of righteous rage at the private health-care industry.

More than just the world’s largest health-care firm, UnitedHealth also has the second-largest weighting in the Dow Jones Industrial Average. The $205 billion company accounts for 5.67 percent of the DJIA index, trailing only Boeing’s 9.79 percent share.

That can’t be lost on Sanders.

With few popular legislative successes to point to, Donald Trump plans to center his reelection campaign on the robust economy that has boomed throughout his presidency.

He said as much in a tweet on April 16, gloating that the eventual Democratic nominee would have to run against “maybe the best Economy in the history of our Country.”

“May God Rest Their Soul,” he added.

I believe it will be Crazy Bernie Sanders vs. Sleepy Joe Biden as the two finalists to run against maybe the best Economy in the history of our Country (and MANY other great things)! I look forward to facing whoever it may be. May God Rest Their Soul!

Goldman Sachs economists also identified a strong stock market as a key factor in what they forecast will be a Trump victory in 2020.

An April 2019 health-care sell-off will be long forgotten when November 2020 rolls around, and there’s no reason to believe that Bernie is purposely striking fear into the hearts of health-care investors as part of an insidious election strategy.

However, the war over Medicare for All will only intensify as election season matures, so the recent health-care rollercoaster – and its impact on the Dow and other key indices – could be a preview of the havoc that the presidential contest could wreak on the stock market if the senator from Vermont completes his evolution from fringe radical to Democratic nominee.

Just listen to the roar of approval that Medicare for All received at Sanders’ recent Fox News town hall. 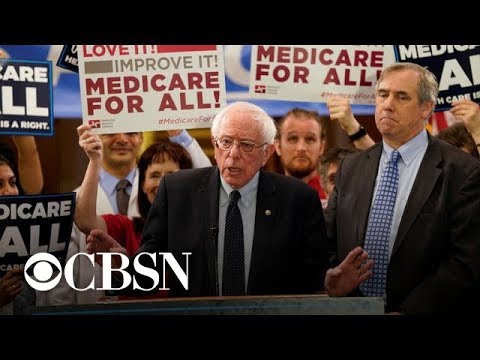 If nothing else, a few election-season potshots at UnitedHealth or Merck could add further pressure to a DJIA – and a Trump reelection campaign – that looks bullish in early 2019 but could easily cool off within the next 18 months.

For now, it’s enough to say that key Dow stocks are plunging, and you can blame Bernie Sanders.

Looks like President Trump is scared of our campaign. He should be.