Kawhi Leonard knocked off the Los Angeles Lakers and LeBron James, even without co-star Paul George on Tuesday night in an epic NBA opener. Unfortunately, a historically cringe-worthy advert for Terminator: Dark Fate, starring Leonard, George, and movie stars Arnold Schwarzenegger and Linda Hamilton aired during a time-out, and it can not be unseen. 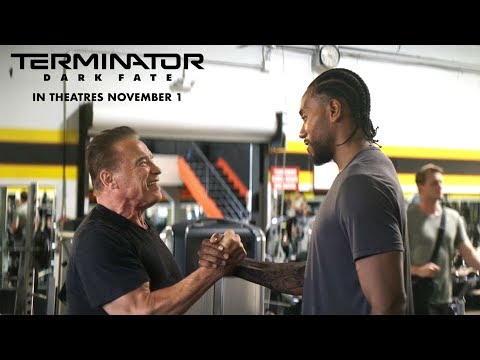 The premise of this advert was straightforward. Kawhi Leonard chats a little with Schwarzenegger, comes out, his partner in crime Paul George is there, Linda Hamilton (who is the lead in Dark Fate) chimes in and Kawhi turns out to actually be a terminator. Unfortunately, things get weird, predominantly because the LA Clippers’ superstar hates everything this ad stands for, and it’s so obvious.

Kawhi didn’t like it when people made fun of his laugh last year, to the point that he made a point of mentioning it first during the title celebration in Toronto. He also clearly hates the idea that he’s “emotionless.” Watching this advert, you get the feeling that the producers wanted to run a completely different ad, and Leonard’s people shut it down to avoid perpetuating a stereotype.

Why else would they have Schwarzenegger reassuring Kawhi that “terminator” was a compliment, and then have PG awkwardly chime in that he’s “a fun guy” while Leonard stands there looking precisely the opposite? The cringe goes nuclear when Linda Hamilton, embodying her Sarah Connor role, does a fake Kawhi laugh, and then into meltdown when Arnie says “What it do baby” at the end. The former Governor of California is certainly no stranger to cheesy terminator cameos.

For what it’s worth, Twitter appeared to enjoy the advert although it was the (unintentional?) humor that seemed to resonate with fans.

Bruh this Terminator commercial with PG and Kawhi was so uncomfortably funny. I’m really in this room weak!

Not everyone was so convinced, however.

NBA Players Have A Rich History of Awkward Acting

Other than inevitably ending up in a meme on Pewdiepie’s “Cringe Tuesday’s”, we get a solemn reminder that athletes that can appear natural and at ease while acting are one of the rarest commodities on earth. It’s also not “The Claw’s” first foray into acting. Anyone that avoided the Spurs’ HEB commercials can consider themselves very lucky. Watch at your own risk.

It’s not merely a Kawhi Leonard problem. Lets not forget Lebron James’ somehow making an animated advert for Sprite cringe-worthy. If it was any indication of the vocal gymnastics we can expect in Space Jam 2, we could be a rough watch. It’s worth mentioning at this point that Michael Jordan wasn’t that bad in the original Space Jam, he wasn’t good, but he wasn’t that terrible either. Maybe people should start factoring that into the GOAT conversation.

Ultimately, the Clippers superstar is a low key guy who hates the media spotlight and doesn’t enjoy the perception that he is robotic. Unfortunately, if you’re nicknamed “The Terminator” and the marketing people want to run an ad literally with the original terminator in it, it’s probably only going to cement a stereotype.