The “Roar” singer claims she and Swift buried the hatchet in favor of “empowering” one another.

It’d be a real cute claim – if it weren’t an obvious attention-getting stunt from a woman who should be old enough to know better.

Katy Perry Has a Bizarre Brand of ‘Feminism’

Recently, Katy Perry called into “The Howard Stern Show” on SiriusXM to talk about her pregnancy, who she’s quarantining with, and what it’s like to be pregnant with “dark moods.”

Then she dove into her newfound friendship with Taylor Swift – a woman who she spent most of her career at odds with.

Apparently, she thinks settling this feud in public is a heroic example of feminism:

It’s hard for young girls grown up, [with] cliques and high school and pettiness and all that stuff, so now we’re super friendly and I’ve always wanted the best for her and we can talk about the best we want for each other.

Wait. “Cliques and high school and pettiness?” Just how old are these two women?

They should be far removed from the “cliques and high school and pettiness” of their teenage years. Why are they still behaving like they’re extras on the set of “Mean Girls?”

Why Is a Grown Woman Still Acting Like a Teenage Girl?

Actually, it might be unfair to lump the two women together. These days, Taylor Swift is more concerned about the fate of the American experiment.

She’s fighting for the right to own her masters. And she’s broadening her creative efforts because she knows she can’t dance and sing “Trouble” onstage in a black sequined leotard for the rest of her life.

She even knows how to poke fun at feminism’s dark underbelly while making a feminist statement. And she’s made clear she doesn’t have time for petty shenanigans anymore. 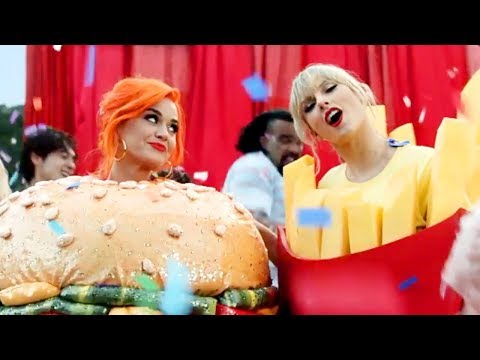 In other words, she’s acting like an adult. Granted, she’ll never be Ani DiFranco or Joan Armatrading – but neither do we expect her to be!

So tell me – why is Katy Perry still behaving like a teenage girl when she’s pushing 40? And how can she possibly think that infantilizing herself is a feminist statement?