Earlier this week, Katy Perry proved that awful people tend to stick together when she defended Ellen DeGeneres against the onslaught of criticism that the talk show host was facing from her employees.

While Perry’s defense of the “Finding Dory” actress and sometime comedian earned her a backlash from her fanbase who somehow thought she was more “woke” than that. It shouldn’t have been too surprising when you consider how Perry treats her own underlings.

Katy Perry was one of only a handful of celebrities who defended Ellen DeGeneres, claiming that she was a “kind” person despite DeGeneres’ employees demonstrating that the work environment was unsustainably toxic.

Perry, like Kevin Hart and Jay Leno — who also defended DeGeneres — then found herself in the eye of a backlash from her fans, who correctly pointed out that a celebrity’s experience as a guest on a show is far different than an employee’s treatment on that same show.

Some even compared DeGeneres to Harvey Weinstein, pointing out that Weinstein didn’t go after the Meryl Streeps of Hollywood (because she wielded power) but, rather, the women he deemed “powerless.”

But while fans of Katy Perry were left scratching their heads, wondering how she could possibly defend Ellen DeGeneres, The Smoking Gun provided the answer in the form of her tour rider.

And It’s Obvious She’s No Better

According to her tour rider, her dressing room must be draped in “soft pink or cream” or it will be deemed unacceptable. She gets super specific about the flower arrangements allowed in her dressing room, as well, going so far as to underline the fact that she wants no carnations in a said floral bouquet. (It’s unclear what the consequences of a carnation transgression would be, though.)

Video: Katy Perry Defended Ellen DeGeneres Because Birds Of A Feather Flock Together 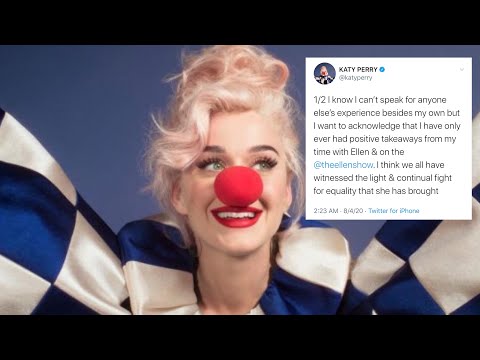 And as for the employees? Well, drivers are “not allowed to start a conversation with the client” — which means that they are only allowed to speak when Katy Perry deems them worthy enough to be spoken to. They are also not allowed to ask for autographs or pictures, and they aren’t allowed to even look at her in the rear-view mirror.

I’m sorry, but who exactly does Katy Perry think she is? This absolutely atrocious behavior towards people who are essential to making a tour run smoothly is only proof positive that she’s not as “woke” as her fans think (or thought) she was.

No wonder she defended Ellen DeGeneres — they’re both equally awful.