As far as expectations for a Queen Consort go, Duchess Kate Middleton is far and away proving to be the ideal woman for the role.

So much so that we’ve seen a body language expert analyze Kate’s recent behavior and interpret how she’s dealing with her increased role as a senior royal.

The results? Quite well, it would seem. 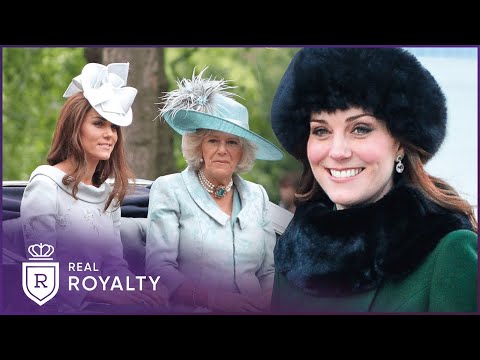 Without getting too ahead of ourselves, as we still have a very able-bodied Queen Elizabeth on the throne, and a fit and healthy Prince Charles waiting in the wings, we can and should consider the role in Prince William’s eventual success that Kate Middleton will play.

The role of future Queen consort isn’t one to be taken lightly, and the media attention that comes with it would be enough to make lesser royals collapse in tears.

Duchess Kate, however, is made of sterner stuff. And boy has she shown that of late.

Judi James is a body language expert who has been speaking with The Express, who claims when discussing Kate Middleton:

Kate’s role has grown slowly and carefully. She appears to be a rule-keeper who could evolve into a rule-enforcer once she is Queen. She could protect protocol and maybe even act as mediator in the family but without becoming stuffy or unapproachable.

In an era where certain royal family members tried to force change, someone who respects tradition would be most welcomed

I admit I’m a dyed in the wool monarchist. But that doesn’t mean I have no time for change or modernization. So long as such measures are taken for the greater good of the royal family.

We recently endured a royal couple who it is claimed had some sweeping changes they wished to implement. Fortunately, nothing came of that.

Tradition is important. In Duchess Kate Middleton, we have someone who is thoroughly modern but who will also protect and, more importantly, respect the traditions of the royal family and what it represents.

It cannot be denied that as time has passed, Duchess Kate Middleton has slowly but surely grown into the role she now occupies.

Let’s be honest, it isn’t the easiest position to take up, but she’s shown a determination and willingness to learn that even the Queen has quietly acknowledged. She looks set to be rewarded with even more responsibility, as the Palace clearly seems comfortable that Kate is capable of an increase in her already active role.

Judi James commented to The Express during her chat:

Kate’s non-verbal signals suggest raised levels of confidence recently. She appears to be moving into a more high-profile royal role in her own right. Although the Queen shows no sign of slowing down with age, it does appear that Kate is increasingly seen as a future leader in the family.

A future leader she most certainly is, and I think I speak for most royal fans when I say that the future of the monarchy and the well-being of the future King couldn’t be in better hands.