Joe Biden is going to need a lot of help to win the 2020 election. | Source: REUTERS/Jonathan Ernst

He came across as a doddering old white man, out of touch with problems facing African-Americans and other people of color in the United States.

There’s no other way to put this, but bluntly: Joe, get a Black VP. Period.

You Ain’t What, Joe Biden?

In what can only be described as a total face-palm moment, the following words came out of Joe Biden’s mouth about 11 minutes into his interview this morning.

If you have a problem figuring out whether you’re for me or Trump, then you ain’t black. 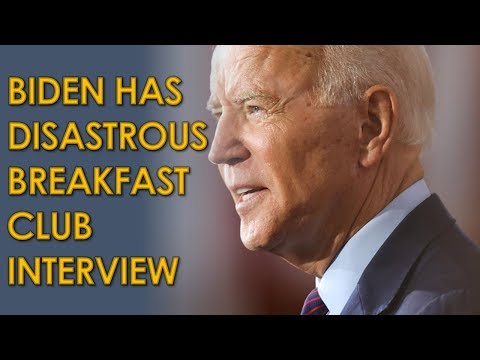 Charlamagne, of course, didn’t hesitate to call Biden out on his tone-deaf comment. “It don’t have nothing to do with Trump!” he shouted. “It has to do with the fact [that] I want something for my community.”

Almost immediately, Joe Biden’s disastrous interview became a trending topic on Twitter, with people calling him out for being both racist and tone-deaf.

Both #YouAintBlack and #JoeBidenIsARacist became worldwide trending topics in a matter of minutes.

And right-wing MAGA trolls almost tripped over themselves trying to out-do one another with the despicable comments skewering Biden, while praising Trump as some kind of champion for civil rights. (The hilarity…)

Rumors are swirling that Joe Biden is seriously considering Amy Klobuchar as his vice presidential running mate — even going so far as to vet her for the job.

And he needs to not.

Frankly, this foot-in-mouth performance has proved that he is out of touch with a large segment of the Democratic voting bloc. Black men and women will, in all likelihood, decide the fate of the election in November 2020. And while many were quick to rightly dismiss Tara Reade’s accusations as the political hatchet job they clearly were, they’re not as forgiving when Joe Biden, himself, fumbles the ball at the five-yard line.

The fate of the United States is in Joe Biden’s hands. More than any other election year, 2020 is proving to be crucial.

If Joe Biden doesn’t pick a Black VP — Stacey Adams, Kamala Harris, even Maxine Waters at this point — and get a serious lesson in racial sensitivity, the United States will suffer under four more years of Donald Trump.