Amazon CEO Jeff Bezos’ security consultant for two decades, Gavin de Becker, has formed the opinion that the publication of personal details pertaining to Bezos’ extra-marital affair by The National Enquirer may have been politically motivated.

Speaking to MSNBC, Washington Post features writer Manuel Roig-Franzia revealed that de Becker and his team had concluded that Bezos’s phone was not hacked. Rather, Bezos’ personal and confidential information may have been obtained by a government body:

Gavin de Becker told us that he does not believe that Jeff Bezos’ phone was hacked. He thinks it’s possible that a government entity might have gotten hold of his text messages. 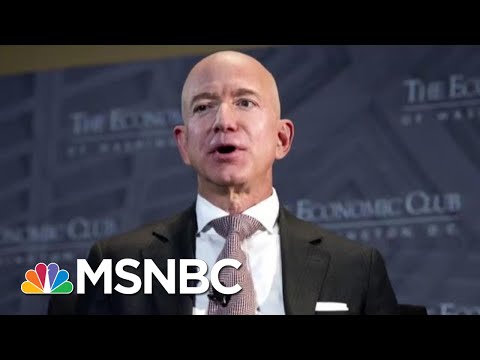 “American Media emphatically rejects any assertion that its reporting was instigated, dictated or influenced in any manner by external forces, political or otherwise. End of speculation — and story.”

Assuming that is the case, AMI has gone to extraordinarily great lengths to ensure that its publication of explicit text messages between Bezos and his lover Lauren Sanchez does not come across as politically motivated.

In a Medium post published on Thursday, Bezos disclosed that AMI had tried to blackmail him.

According to Bezos, the media firm had promised not to publish ‘d*ck pics’ of him if he agreed to certain conditions. One condition was to issue a statement claiming that AMI’s actions were not politically motivated.

Jeff Bezos Prefers to ‘stand up, roll this log over, and see what crawls out’.

Furthermore, Bezos went on to include an email sent by AMI’s deputy general counsel, Jon Fine, to de Becker’s attorney. In the email, AMI proposed certain terms to Bezos, the fulfilment of which would see the publication bury embarrassing material:

A public, mutually-agreed upon acknowledgment from the Bezos Parties, released through a mutually-agreeable news outlet, affirming that they have no knowledge or basis for suggesting that AM’s coverage was politically motivated or influenced by political forces, and an agreement that they will cease referring to such a possibility.

However, Bezos – the world’s richest man – turned down their offer choosing to go public rather than accede to the extortion attempt.

Brother to Jeff Bezo’s Lover, and a Trump Fan, now a Suspect

Bezos’ security consultant is not the only one who sees the hand of politics in the saga. Lauren’s brother, Michael Sanchez, feels the same way too.

According to the Washington Post, Sanchez has said ‘deep state’ operatives within the United States government may have been culpable. Interestingly, Sanchez is now a subject of the investigation being conducted by de Becker.

Interestingly Lauren’s brother is a vocal supporter of President Donald Trump. Additionally, Michael has also been linked to other Trump allies such as Roger Stone and Carter Page.

Above all, Trump’s views of Bezos are no secret and they have mostly been dictated by the latter’s ownership of The Washington Post. Consequently, the publication has drawn the president’s ire over its unfavorable coverage of him.

But after The National Enquirer published details of Bezos’ love affair, the Amazon CEO managed to elicit some sympathy from Trump. The tweeted message seemed genuine and heartfelt at first until a nickname, ‘Bozo’, was thrown in.

So sorry to hear the news about Jeff Bozo being taken down by a competitor whose reporting, I understand, is far more accurate than the reporting in his lobbyist newspaper, the Amazon Washington Post. Hopefully the paper will soon be placed in better & more responsible hands!