Something stinks at Amazon.

CEO Jeff Bezos has released his annual shareholder letter. All it does is highlight the disconnect between the billionaire and the very people who put him where he is today.

Bezos waxes lyrical about his “heroic Amazonians” who are “working around the clock” during the coronavirus pandemic.

By reading the letter, you would think all is well at Amazon.

Criticism is a fireable offense at Amazon

Only days ago, two tech workers were let go for daring to publicly criticize the warehouse conditions that workers are enduring at the moment.

Workers like Chris Smalls. Smalls not only lost his job for daring to lead a worker walkout over health and safety concerns in a Staten Island warehouse–he was also the victim of a smear campaign by his former employer. 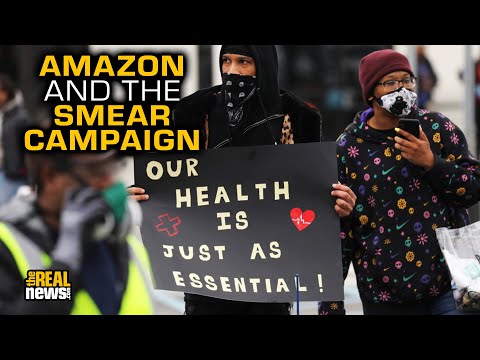 Addressing the firing of both Emily Cunningham and Maren Costa, Amazon claims that both have “repeatedly” violated internal policies.

I’m not buying what Jeff Bezos is selling

In his letter to Amazon shareholders, Jeff Bezos claims:

Amazonians are working around the clock to get necessary supplies delivered directly to the doorsteps of people who need them. Crucially, while providing these essential services, we are focused on the safety of our employees and contractors around the world. We are deeply grateful for their heroic work and are committed to their health and well-being.

Sorry, Jeff, I ain’t buying it.

All of the evidence points to the exact opposite being the case. And shutting down dissenting voices by threatening them with their walking papers isn’t exactly a great look either.

Not only did Chris Smalls lose his job, but a meeting took place, with Amazon CEO Jeff Bezos in attendance, where Smalls was given the label of not being “smart or articulate”:

He’s not smart, or articulate, and to the extent the press wants to focus on us versus him, we will be in a much stronger PR position than simply explaining for the umpteenth time how we’re trying to protect workers.

These are the words of Amazon’s general counsel, David Zapolsky, who continued:

We should spend the first part of our response strongly laying out the case for why the organizer’s conduct was immoral, unacceptable, and arguably illegal. And only then follow with our usual talking points about worker safety. Make him the most interesting part of the story, and if possible, make him the face of the entire union/organizing movement.

I feel I should point out once again that Jeff Bezos was party to this meeting. Hell, these daily meetings exist for Bezos’ benefit!

Show gratitude to your employees by listening to their concerns, Mr. Bezos

Sickeningly, Bezos signs off his letter to shareholders by saying:

I am extremely grateful to my fellow Amazonians for all the grit and ingenuity they are showing as we move through this. You can count on all of us to look beyond the immediate crisis for insights and lessons and how to apply them going forward.

Yeah, Bezos is grateful to his “fellow Amazonians” so long as they toe the line and play ball.

Once you step out of line or dare criticize the company publicly, you’re not only running the risk of losing your job, you risk having your character and intelligence questioned as well.