By CCN.com: India’s benchmark index the Bombay Stock Exchange Sensex crossed the 40,000 mark for the first time ever after the early Lower House election results showed that the political coalition led by Prime Minister Narendra Modi, National Democratic Alliance, is headed back to power with an even larger mandate. The feat was achieved at 10:31 AM local time on Wednesday.

However, after hitting the record high, the Sensex index closed over a thousand points lower at 38,811 points.

SENSEX Rally a Vote of Confidence in Modi?

The rally seemed to indicate that the markets consider a new term for Modi will herald a boom in equities. This would be a replication of Modi’s first term. Since achieving power in May 2014, the Sensex has recorded average returns of 9.37 percent. Overall, the Sensex has climbed by 56 percent since Modi rode to power.

Then, the broader NIFTY index, which is composed of 50 blue chip stocks, also climbed by nearly 58 percent. The Sensex is a smaller index comprises of 30 blue chip stocks. On an annual basis the NIFTY grew by about 9.52 percent.

According to The Times of India, the stock market strength during Modi’s first term was mainly driven by domestic investors. This occurred as domestic investors moved from assets such as gold and real estate to stocks. 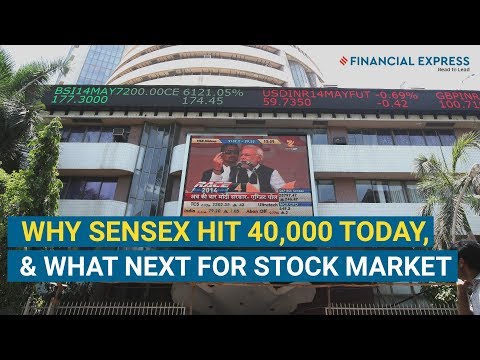 Then, as now, the BSE Sensex also made history when it breached the 25,000 mark for the first time ever. This happened as vote counting was underway, just like the case earlier today. The NIFTY also crossed the 7,500 level managing to record an intra-day high as the votes were being counted.

At the time of the Sensex breaching the 40,000 barrier, Modi’s Bharatiya Janata Party (BJP) had won more than half of the contested seats. According to Reuters the BJP had swept 299 out of the 542 positions. These seats are in the Lok Sabha, India’s lower house of parliament. BJP’s wins have now grown to 343 seats thereby giving it an increased majority from the last election. During the 2014 election, the BJP won 282 seats.

Congratulations, my friend @Narendramodi, on your impressive election victory! The election results further reaffirm your leadership of the world's largest democracy. Together we will continue to strengthen the great friendship between India & Israel.
Well done, my friend! 🇮🇱🤝🇮🇳 https://t.co/2U5yJmHddS