Howard Stern is the latest star in line who must answer for his past. Stern is under fire for a recently resurfaced 1993 sketch in which he wore blackface and used the “n-word.”

The sketch is nothing short of terrible.

But, according to Stern, it was a parody of Ted Danson and Whoopi Goldberg. The former couple wrote and performed a similarly shocking sketch earlier that year. 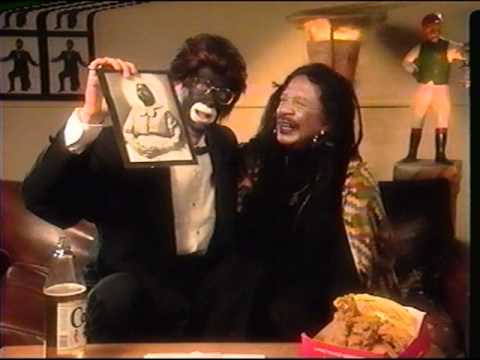 If the King of All Media gets his crown removed, should Whoopi Goldberg join him on the unemployment line?

Howard Stern Uses His Privilege in the Worst Way

A critical part of the Black Lives Matter (BLM) movement lies in the hands of the privileged. People of color are requesting that their white allies use their privilege and their platforms to help them out.

That’s partly to counteract the damage that people like Howard Stern have done in the past.

In his deplorable 1993 sketch, he speaks in a demeaning accent, drinks malt liquor, says the “n-word,” and, of course, wears blackface. He did it seemingly without the slightest fear of backlash. That’s privilege at it’s finest.

It’s pretty sad when the most privileged on them all, Donald Trump Jr., calls it out.

The question is, does his ‘parody’ angle get him off the hook? After all, Robert Downey Jr. seemed to escape his blackface scandal without a scratch since he was using it as a parody.

Stern went on The View last year and adamantly denied he ever used the “n-word” on air. But a Twitter user recently tweeted a video with his not-guilty plea playing back-to-back with his problematic sketch.

Cohost Sunny Hostin let him off easy, but the big question is: why was Howard Stern being grilled on a show hosted by Whoopi Goldberg?

Whoopi, who was sitting about five feet away from Stern, agreed with his lies, saying his cohost “Robin would’ve killed you.”

But the main reason he aired the bit was to poke fun at Whoopi Goldberg’s infamous 1993 sketch.

During a roast, Whoopi’s boyfriend Ted Danson was painted in blackface makeup and said the “n-word” more than a dozen times.

Whoopi responded by telling the audience, “I don’t care if you don’t like it. I do.” She later admitted to writing a majority of the sketch.

Black people have been getting canceled left and right for less egregious crimes. So if we’re going to put Howard Stern on the chopping block, shouldn’t Whoopi Goldberg join him?

Howard Stern Is Built on Controversy

Howard Stern is nobody without controversy. Among many things, the “shock jock” has worn blackface, championed rape at gunpoint, and openly mocked Hispanic people.

Whoopi Goldberg had an affair with a married man in Ted Danson. She then wrote a blackface sketch for him.

Both problematic icons are still hosts of major media platforms.

While I’m not claiming who should or shouldn’t be canceled, it seems like if one has to go, they should all go together.

Considering Whoopi Goldberg is worth $60 million, and Howard Stern is worth a whopping $650 million, the least they could do is start opening their purses.