The fallout from Prince Harry and his now-infamous wreath that was never put to use has dragged on this week, and if we’re honest, it hasn’t been a good look for either the Duke of Sussex or the royal family.

You’ve probably heard the story by now: Prince Harry, now stripped of his military duties and living the life of a weird celebrity type in California, wanted to have a wreath laid at the remembrance Sunday event in the U.K. this past weekend in absentia.

The request was denied, and thus “wreath-gate” was born, resulting in Prince Harry deciding to lay his own wreath in LA.

It’s terribly embarrassing, in all honesty.

The Queen has marked the centenary of the burial of the Unknown Warrior during a small private ceremony at Westminster Abbey, ahead of Remembrance Sunday.#WeWillRememberThem #Queen #Royal pic.twitter.com/DHcVp9b7a1

I’m sure that Sussex fans have tried to paint the LA cemetery photoshoot as Harry’s response to not being allowed to have a wreath laid in his homeland, but only a fool would believe that.

The choreographed photoshoot wasn’t a spur of the moment thing. This wasn’t a case of Prince Harry being told his wreath would remain in its packaging and him rushing out to commemorate the day in the only way he could.

I firmly believe that Harry and Meghan’s photoshoot would have surfaced even had the royal family acquiesced to the prince’s request.

They’d have simply repackaged the photoshoot for the Wednesday and spun it as a mark of respect for Harry’s new home, the United States.

Those of us who have followed the exploits of the Sussexes have come to expect nothing less. Since leaving the royal family, the couple has lurched from one bad PR decision to another, seeing their popularity diminish along the way.

Of course, a source close to Prince Harry has denied that this could possibly be a PR stunt:

If you listen to the podcast that he did at the weekend, he talks about wearing the poppy and wanting to recognize Remembrance Sunday, not only for all those people historically but also for the people he knew that he lost. I don’t think that’s someone who does something like Remembrance Sunday as a publicity stunt.

However, I do believe the royal family could have played their part in this debacle a tad smarter.

I know, I know. Prince Harry expecting to spend his time chilling in his mansion in Santa Barbara while someone else lays a wreath for him is entirely unfair.

I agree. The truth is that Harry wants to both have his cake and eat it. The royals were perfectly entitled to put their foot down and say enough was enough.

But was is the smart move in retrospect?

I’d have to say that it wasn’t.

The royal family could easily have risen above all of this by allowing Harry’s wreath to be laid alongside the others.

Was he entitled to be part of the ceremony in any way considering he can’t be bothered to step foot on British soil now that he’s living his American dream? Absolutely not, but the royals could have defused the situation by taking the high road.

Instead, they opened the door for the usual suspects to grab some more headlines and PR opportunities to peddle their wares.

Robert Lacey was, of course, among them, commenting:

I think this is an indication that things are worse than we thought. If everything was hunky-dory, there seems no reason why a wreath should not have been laid in Harry’s name. If the royal family or the palace wanted to co-operate, then it would seem to be a perfectly reasonable request to make that could have been fulfilled. I don’t think it augur’s well for the prospects of a reconciliation.

On the face of this, it would seem that Harry is keener on reconciliation or maintaining some sort of link than the palace is to granting one. 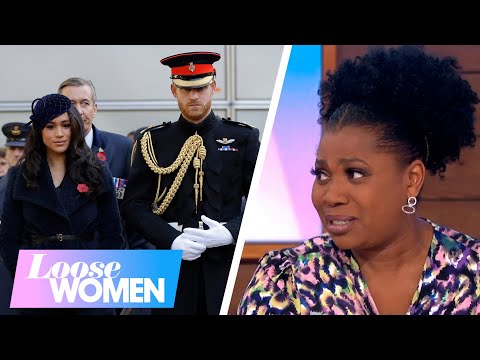 No one comes out of this looking good, in my opinion, least of all the royal family.

We expect Prince Harry and Meghan Markle to be involved in this type of PR own-goal these days. Their post-royal existence has been littered with them, but I expect the royal family to be a bit savvier when it comes to this kind of issue.

Did Prince Harry deserve to be part of the remembrance Sunday proceedings? No.

But it would have been the smarter move to have a non-royal lay his wreath on his behalf quietly and be done with it. No fuss, no problem.

At this stage, both parties will just want to move on and forget a weekend that didn’t reflect well on either.