The power is out. The lights are off. Civilization has completely fallen apart. No one knows who’s in charge any more. And Venezuela is highly polarized and tense.

In a scene reminiscent of a post-apocalyptic nightmare scenario, one that is absolutely real (and the nightmare apocalypse was Hugo Chavez and Nicolás Maduro’s lives’ work of socialist hellraising), protestors hit the streets of cities roiled by blackouts Saturday.

Shadow Boxing In The Dark 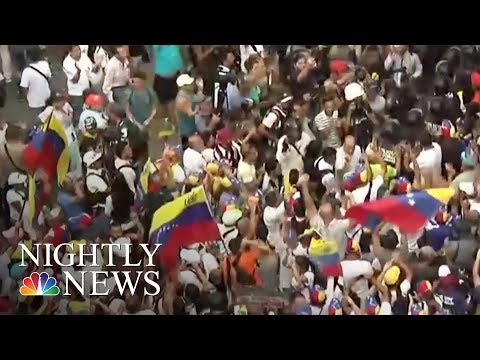 Venezuelan position leader, 35-year-old Juan Guaidó urged supporters to go to the streets and protest Maduro’s unrelenting grip on power amid a tumultuous power struggle, while losing his grip on power in a hydroelectric plant neglected by Maduro for years.

Guaidó claims that 22 of the South American country’s 23 states were affected by the blackout. Maduro says the blackout was caused by a cyber attack led by the United States, a claim which his adversaries view as absurd.

They have a way of falling apart faster under socialism. We’re always swimming with the current trying to get ahead, or keep up, and in a free country we’re able to do so.

But when socialism happens you can’t get ahead of the current no matter how hard you kick, so people stop putting in the effort and things fall apart very fast.

It becomes a race to the bottom.

This is what happened in Venezuela after Hugo Chavez announced he would be bringing “21st-century socialism” to the South American country by nationalizing the country’s oil industry to fund government welfare programs:

“Chavez fired thousands of oil employees, executives and workers, replacing them with 80,000 political operatives. When Chavez threatened foreign corporations, they abandoned Venezuela, taking billions of dollars in investment with them.

Big Socialism failed to produce the same amount of oil for the same cost, and Venezuela’s economy began its inevitable collapse.”

The power grid in Venezuela has actually outlasted the petrol-based transportation system, which is a truly astonishing failure of socialism in the country with the world’s largest oil reserves and 80,000 employees working for the government oil bureau:

“The public transportation system collapsed last year. Those who have a vehicle wait hours to fill the tanks. Fuel shortages are rampant.”

Here in 2019 the country has regressed to the 19th century.

Venezuela has become a byword and warning to all the nations of the world.

It is a terrible example of the cost of embracing socialism and allowing authoritarian politicians to “run a train on the progressive agenda” in your country.

To be fair and balanced, the U.S. government has done plenty to make things even worse in Venezuela on top of the devastating socialist revolution of Chavez and Maduro.