Republican House Minority Leader Kevin McCarthy (R-CA) is sounding a lot like a tech entrepreneur these days. In a plea before a select committee on March 12 introducing ideas for Congress to prioritize in the 21st century, the GOP leader made his case for integrating blockchain technology into the government’s day-to-day operations.

McCarthy fell short of proposing that they use a public crypto network such as Ethereum, for instance, suggesting instead that the U.S. government build its own blockchain. He is, however, willing to admit that Congress “might need help from the outside.” 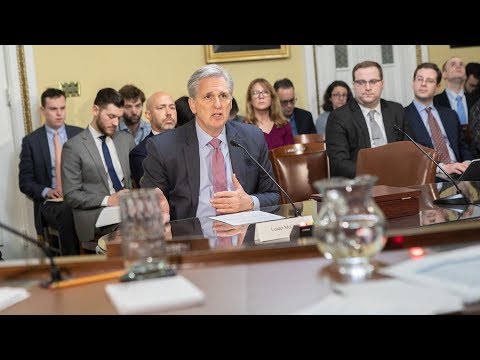 McCarthy conveyed a sense of urgency to his peers in what he described as both a “window and an opportunity,” particularly considering the issue that both sides of the aisle have proven they can agree on is technology. Paramount to the government embracing the 21st century for technology is security, and the House Minority Leader emphasized that the blockchain is the solution, saying:

“Blockchain is changing and revolutionizing the security of the financial industry out there. Why would we wait around and why wouldn’t we institute blockchain on our own to be able to check the technology but also the transparency of our own legislative documents.”

For instance, it’s not uncommon for members of Congress to learn the details of a new bill hours before it reaches the floor, a lack of transparency that the blockchain could solve.

Another point of contention is bill revisions, something that McCarthy suggested a simple Microsoft program could let Congressional members view alterations in real-time, emphasizing that it is not a “partisan issue” and that it “helps on both sides,” adding:

“You could actually help reframe to the 21st century the ability to make this place more effective, more efficient, and most importantly more accountable.”

Similar to many financial institutions, the federal government earmarks more than three-quarters of its $60 billion-plus IT budget for “managing outdated legacy systems instead of investing in new technologies.” McCarthy is seeking an overhaul, and he has been out front pushing a digital strategy for the U.S. government. This is essential if Congress is going to be able to bolster its customer service to constituents, who might have needs that cannot be addressed in a timely manner via outdated systems.

The Republican leader alongside Steny Hoyer (D-MD) also organized a hackathon event in which they invited developers for a two-day event to uncover vulnerabilities within government systems.

McCarthy is not the blockchain’s only political ally. Reps. Warren Davidson and Darren Soto are behind the Token Taxonomy Act. The bill is designed to deliver “light-touch” regulation to crypto startups. The congressmen are looking to prevent technology innovation from fleeing the U.S. for more blockchain-friendly jurisdictions.

#TokenTaxonomyAct Thanks to all who have shared input. @RepDarrenSoto & I are excited about the revisions and look forward to reintroducing this bipartisan bill soon. We continue to inform our colleagues about the urgent need for light-touch regulatory certainty. #blockchain

The bill was introduced at year-end 2018 but is currently being revised is expected to be reintroduced soon.