Senator Bernie Sanders (I-VT) suffered a heart attack at a campaign event Tuesday, his doctors and campaign have confirmed to reporters. Sanders’ 2020 campaign for the Democratic party’s presidential nomination didn’t allow the media to interview his treating physicians until Friday.

The public knew earlier this week that Sanders had chest pains and stents put in for a blocked artery, but this is the first time we’ve learned that Bernie Sanders had a heart attack.

Physicians at the Desert Springs Hospital Medical Center in Las Vegas said the Vermont Senator had a “myocardial infarction.” That’s the term doctors use when a prolonged disruption of blood flow to the heart causes permanent tissue damage to the heart muscle.

Now that Democratic primary voters know the 78-year-old candidate has had a heart attack, it could change the entire calculus of the 2020 nomination contest.

With all due sympathy for this tragic danger to Sen. Sanders’ health, and for his family who feared for their loved one’s life and the best wishes for his most complete possible recovery, we are duty-bound to ask what will happen next.

Bernie Sanders is a public figure who holds elected office. He had an enormous influence on the 2016 presidential election. As he makes another substantial and viable bid for the world’s most powerful elected office in 2020, his heart attack has ramifications of historical import.

On the face of it, having a heart attack while campaigning makes Sanders unelectable to many voters. That’s if he even decides to continue with his candidacy. Bernie 2020 says he’s still in the race. They’ve promised Sanders will be at the next Democratic Primary debate on Oct. 15.

But running the U.S. executive branch will be as demanding and stressful as campaigning or more. And voters won’t feel comfortable with a president at high risk of having a heart attack shepherding the country through the next unforeseen crisis.

Hillary Clinton’s May Have Changed Too 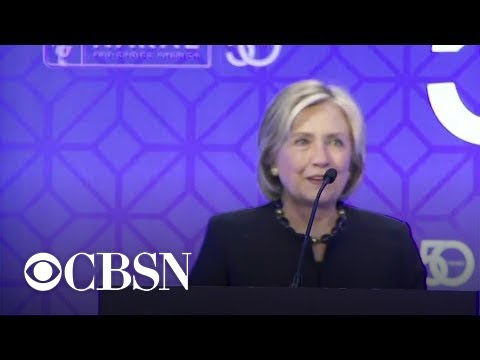 If Bernie does step out of the race, or his supporters jump from his campaign to another, obvious winners include Elizabeth Warren and Andrew Yang. Both hauled impressive fundraising totals in the third quarter. Both appeal to the same political cross-section of voters as the socialist Bernie Sanders. But the non-obvious winner could be Hillary Clinton.

A year ago, Clinton’s chief strategist for her 2008 presidential bid wrote in The Wall Street Journal that she was planning to run again in 2020. This March, she denied that she’d be running again, but that’s what every presidential hopeful says – until they don’t.

She’s been increasingly more vocal in the media as the impeachment push against Trump ramps up. And while Bernie was in the hospital, Hillary went on a busy media tour, ostensibly to promote “Gutsy Women,” a new book she co-wrote with daughter, Chelsea Clinton.

With Joe Biden’s devastatingly underwhelming fundraising, Wall Street Democrats warning they’ll back Trump if Elizabeth Warren gets the nomination, and now Bernie Sanders’ heart attack, the 2020 Democratic field looks weaker than ever. Hillary might not be able to resist another at-bat.

Meghan Markle Backed Clinton in 2016 – Is Her Next Endorsement Doomed?