Harry Styles has another acting job.

Gucci has just announced a film series called “Gucci Overture,” which will feature films directed by Gus Van Sant and creative director Alessandro Michele. In addition to Styles, other celebrities such as Billie Eilish, Ariana Papademetropoulos, and Arlo Parks will also make appearances in what’s being called a “mini-film series.”

Will this finally make Styles be in contention for “serious actor” status?

This isn’t the first time that Harry Styles has tried his hand at acting. Leaving aside the films he made with One Direction, Styles’ big-screen debut in “Dunkirk” signaled his desire to transition from his stale “boy band heartthrob” status.

And as well he should: the “boy band” routine gets old after a while, and I’m sure he’d had his fill of the “Larry” shippers as much as his fellow bandmates Louis Tomlinson and Zayn Malik had.

He’s also not the first boy band heartthrob to switch lanes into acting. Mark “Marky Mark” Wahlberg, Donnie Wahlberg, and Justin Timberlake are just a few of the many former boy banders who went on to have acting careers (to varying degrees of success).

While it’s not clear what Harry Styles will be doing in this Gucci-sponsored film series, it’s clear he wants to take the same route as other former pop stars before him, as The Loop reports:

Ouverture was shot entirely in Rome, where actor Silvia Calderoni stars as a woman going through a surreal daily routine in the city, as per Deadline. There she’ll meet a slew of international stars and members of the Gucci crew, including Eilish, Styles, Paul B. Preciado, Achille Bonito Oliva, Darius Khonsary, Lu Han, Jeremy O. Harris, Ariana Papademetropoulos, Arlo Parks, Sasha Waltz and Florence Welch.

It should be noted that Styles has been a model for Gucci in the past, as you can see in the video below. 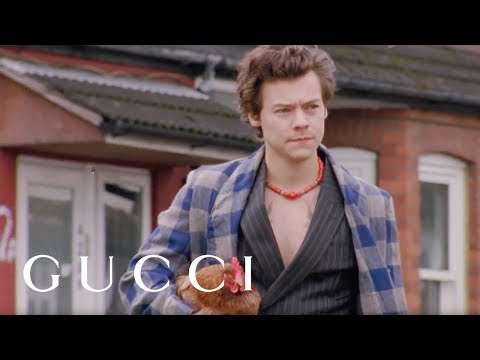 The Reviews Are Mixed

While some fans seem pretty convinced that Harry Styles can become the next George Clooney, other’s aren’t so sure.

While it’s great that he’s taking steps to move outside of the One Direction bubble, Harry Styles has a long way to go before he can be considered a serious actor.