By CCN.com: In gaming, we’ve become well accustomed to fans expressing their love for specific games through fan art, cosplay, and fiction, but few go as far as devoting nine years of their lives to such pursuits. One Minecraft fan has, however, done just that.

Nine Years in the Making

Since August 2010, Blip Noir has spent countless hours painstakingly recreating a city in a Minecraft map known as City of Newisle. Not content with piecing together a skeleton collection of buildings and streets that vaguely resemble a city, Blip Noir painstakingly placed every single brick to recreate a bonafide metropolis on a 1:1 scale – and he’s done this alone. This Minecraft city was nine years in the making, and all this player gets is props from the community. But in gaming, that’s worth gold.

When asked the inspiration behind taking on such an ambitious project, Blip Noir had this to say:

“Besides having a bit of an interest in urban planning, I like skyline and cityscape photography a lot, so Newisle is kind of an extension of that. The buildings themselves are inspired by my real world home city of Toronto as well as New York, Chicago and Montreal.”

A trailer released today for version 1.2 of the City of Newisle does well to highlight just how massive the world is – even by Minecraft standards. And, it isn’t just one city – there are six other cities and towns alongside the main one. 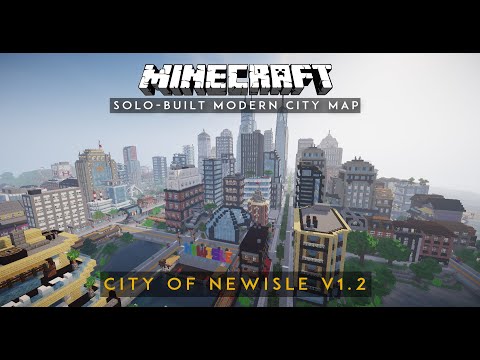 A Livable Place Within Minecraft

Distinct districts populate the massive Minecraft world from a skyscraper-strewn downtown area with ornate parks and public spaces to leafy suburbs by way of surrounding countryside and automated subway lines. The attention to detail doesn’t stop there, though, as every single building is furnished, hence why its taken nine years. The blurb accompanying the trailer reads;

“You’ll find stocked shops, apartment buildings and homes, office towers, minecart-powered transit lines and a variety of places meant to make it feel like a real, livable place within Minecraft.”

The map is currently available for free over on Planet Minecraft. The base version of Minecraft is, of course, a prerequisite.