Brilliant Game of Thrones Finale Deserves Praise. Get Over it, Haters

By CCN.com: SPOILER ALERT! Game of Thrones viewers expecting a slam-bang finale filled with hysteria — you must have been out of your minds – and driven further out of your minds when The Great War ended quietly with Jon Snow’s knife through Daenerys’ heart.

Game of Thrones has never shown a desire to meet audiences’ expectations, but for those paying attention, there was no other way this could end. So while most fans are grabbing spears from the Unsullied, ready to storm Castle HBO, stuff a sock in it and learn why this GoT finale was exactly right.

Daenerys Was a Raging Narcissist

Tyrion wanders the ruins of King’s Landing, eyeing the slaughtered innocents, and is summarily imprisoned for trying to save his brother, Jamie (whom he tearfully mourns, after finding him in the Red Keep’s rubble along with ex-Queen Cersei).

While awaiting his sentence, he convinces Jon Snow that Daenerys is a narcissistic megalomaniac. He reminded Jon that Daenerys turned the Slavers into Baked Alaska, and crucified the nobles of Mereen. She burned all the Khals alive.  She executed Lord Torly and son via Drogon flambé.

Jon, Sansa, and Arya are all threats to her.  Based on her pattern of behavior, Daenerys tends to kill a lot of people before “liberating” them. Tyrion tells Jon there’s only one course of action he can take, and he’s right.

Jon, after vainly appealing to Daenerys to spare Tyrion, and proclaiming his everlasting love for her, slips a knife into her blackened heart. She dies as Cersei did, with a whimper.

Daenerys Was Just Another Evil Queen

What you Game of Thrones finale haters forget is that Daenerys isn’t even from Westeros. She’s from Valyria. She got it into her head that she was entitled to the Iron Throne because her ancestor conquered it.  Ser Jorah reminds her that the only reason Aegon the Conqueror seized the kingdoms was because he could.  “And because he had dragons,” as Daenerys adds.

Might makes right for Daenerys.  She was not a noble freer of slaves and breaker of chains.  She was a power-hungry narcissist. Her self-righteous claim to the throne was threatened after her long journey by none other than her lover and – oops – nephew, Jon Snow. The girl was crazy, amirite?

Not with a Bang, but with a Whimper

The GoT finale was never going to have some shock ending where everything goes to black a la “The Sopranos”.  The big action set pieces had already concluded. The only things left for the GoT finale to resolve were interpersonal conflicts.

The only major characters left were Jon, Sansa, and Arya Stark; Tyrion; and Danerys.  Someone was going to die because neither the Starks nor Daenerys could let the other live. Tyrion, as always, was trying to keep the peace until he realized that always trying to see the best in people was a really lousy long-term strategy.

Tyrion was never much in need of redemption, but was crushed with guilt over his repeated mistakes in both guiding Daenerys, and believing she was a good person.

That his wise counsel to Jon is carried out, and that he becomes Hand of King Bran, where his wisdom will be valued and useful, is exactly the right ending for him.  This was his destiny — to be wise counsel to a good person who was reluctant to take the throne.  Even economist Thomas Sowell agrees.

Arya heads west to make her own destiny because, by her own words, she “will never be a lady [of Winterfell]”.  Sansa gets what she needed to have — power, to be the rightful Queen of the North which is now its own independent kingdom.

Jon Becomes King…Just Not of Westeros

There’s a lot of talk about “breaking the wheel”, that is, the cycle of power and death in Westeros. That’s what Daenerys claimed to be doing.

So, of course, Jon could not stay. He was the last loose end and the only way to maintain peace with the Unsullied, and truly break the wheel.  He was always a man of the North, his Targaryen ancestors were not even natives, and he belonged in only one place: with the Free Folk. They were delighted to have him as their king.

Finally, back in King’s Landing,  veryone gets back to the business of rebuilding and ruling with noble intent.  Again, it’s the only possible ending for the GoT finale.

Get over It, Game of Thrones Finale Haters

The reason you GoT Finale haters hated the entire season is that the show subverted your expectations, even though you’ve been cheering on every big twist for the last 8 years. That includes the big spectacles being in episodes 3 and 5 of this year. You wanted the war with the Night King to be the big finale, but the show was never about the Night King.

Game of Thrones has always been about mankind being its own greatest threat.  That’s been proven out by the fact that Game of Thrones’ own fans are turning on it because they lack imagination. 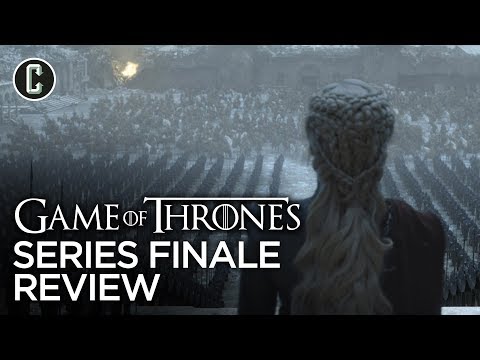 Lawrence Meyers
Lawrence Meyers has published over 2,500 articles on finance and policy at outlets including Breitbart.com, Investorplace, WyattResearch, LearnBonds, Lifezette.com, TownHall.com, U.S. News & World Report, and The New York Observer. He hails from New York City in the USA.
Subscribe
0 Comments
Inline Feedbacks
View all comments
← PreviousMillions to Miss Work After GoT Finale. Here’s Why Economy Will Survive
Next →Game of Thrones: One Chart Exposes GoT Haters as Pretentious Liars

Westworld Heats Up, But Season 3 Is Nothing But Glorified Scrap Metal
March 30, 2020 No Comments

Netflix Was Astonishingly Foolish to Greenlight Season 2 of The Witcher
November 13, 2019 No Comments

Bolivia Mirrors Game of Thrones as Protestors Force Mayor on ‘Walk of Shame’
November 8, 2019 No Comments