Student debt is poised to become a huge topic during this year’s election as candidates square off over the ballooning cost of college in America and the crushing debt it has dropped on younger generations. A lack of government funding in the U.S. has prompted universities to pass their expenses onto their students, which has raised the cost of higher education exponentially.

Instead of feeling push back from consumers for their price hikes, America’s universities are met with thousands of students willing to pay their tuition with borrowed money. That’s because a college degree translates into significantly higher wages. However, the cost of college has risen at a much higher rate than wage growth. According to Collegeboard, tuition for in-state students at a four-year public university is three times what it was in 30 years ago. Meanwhile, a study by Congressional Research Service shows that real wage growth between 1979 and 2018 was just 6.1% for the average worker.

Said another way, 20-24 year olds are making an average of $29,770 and carrying around a loan balance of $37,000 plus interest of anywhere between 4% and 8% on that balance. From that perspective, it’s understandable why out of the nation’s 44 million borrowers, 25% aren’t making payments.

That percentage is seen increasing as well. The Brookings Institute says it expects 40% of borrowers to default on their student loans by 2023.

Keep in mind that borrowing money doesn’t guarantee a degree either. The National Center for Education Statistics says that 60% of students who embark on a degree at public institutions will complete that degree within six years. That figure rises to 66% for private nonprofit institutions and falls dramatically to just 21% for private for-profit universities. 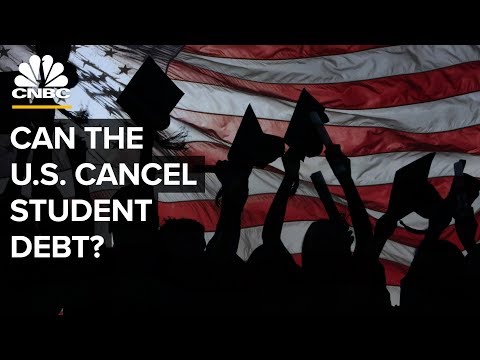 So what does all of that mean for the $1.4 trillion of outstanding student debt in America? The answer is trouble, no matter how you slice it.

From an economic standpoint, the upcoming generation laden with insurmountable debt burdens is problematic. The U.S. needs these new entrants into the workforce to spend money buying houses, cars and everything else that keeps the economy ticking over.

The rising cost of college has been supported by a willingness to dole out loans regardless of a student’s ability to repay them. That vicious cycle has been supported by the market for Student Loan Asset Backed Securities (SLABs), which spread the risk of these loans across investors. SLABs can be traded like other securities, with many investors finding security in the fact that 92.3% of student loans are backed by the federal government.

The debate over whether the SLABs market mirrors that of the residential mortgage-backed securities (RMBs) that caused the last financial crisis is murky. The equity in as SLAB is the borrower’s potential wages, whereas the equity in RMBs were borrowers’ homes. When people walked away from their homes and declared bankruptcy, RMBs were rendered useless. By contrast, a borrower can’t walk away from their degree once it’s earned. So although borrowers can’t make payments, the debt will continue to follow them.

The fact that the government backs the majority of these loans makes them relatively safe investments despite rising default rates.

However, SLABs could be in danger in the coming years should a progressive candidate like Elizabeth Warren or Bernie Sanders take office. Both Democrat candidates are promising to alleviate student debt by forgiving a large portion of outstanding loans. Such a move by the federal government would likely cause the SLABs market to collapse as it would mean most SLABs would never pay out.

A SLABs market crash looks likely if Warren or Sanders take office, the effects of which would likely be felt throughout the market. As the SLABs market is considerably smaller than that of RMBs it probably wouldn’t be as damaging. However, the vicious cycle between the cost of higher education and student debt is troubling for the future of the economy.

The current trajectory is unsustainable at best, catastrophic at worst when you consider what a large-scale default would mean for the U.S. government. Over the next year, the U.S. government budget is $4.746 trillion. If 40% of borrowers default as Brookings expects, absorbing that cost would mean an 11% increase in government spending. Couple that with rising social security costs as baby boomers reach retirement age, and it could be a recipe for disaster.