FIFA is having nothing to do with the Hong Kong protestors showing up to their games.

The Hong Kong fans booed and turned their backs during the Chinese National Anthem in September. Now, FIFA has taken exception to it.

“disturbance during national anthems; use of objects to transmit a message that is not appropriate for a sports event.”

To be fair, FIFA has been issuing fines left and right for audience violations in countries unrelated to China. But most of these fines had some element of danger or violence involved. 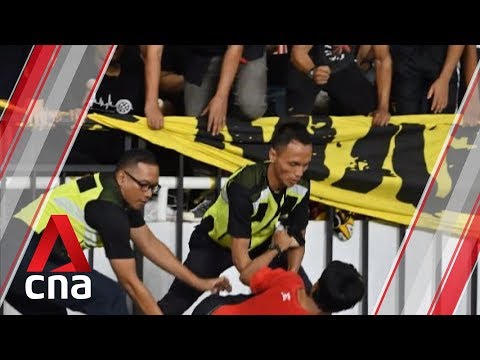 The Hong Kong fans displayed a more peaceful, Kaepernickian protest. When you consider the spotlight that’s currently shining on the China-Hong Kong conflict, FIFA had a chance to make a statement. Instead, they’re just the latest organization to turn their back on Hong Kong’s call for autonomy as the Chinese government tries to take back the city.

Context to the Hong Kong Conflict

Great Britain ruled Hong Kong for 156 years before reverting to Chinese sovereignty in 1997. During their time under British rule, Hong Kong enjoyed a generally British, democratic lifestyle. To avoid turmoil during the transition, the Chinese government said they would operate under the “one country, two systems” rule. Hong Kong would be allowed to maintain its political structures.

Through a series of pro-establishment moves, undemocratic elections, disappearances of booksellers and more, Hong Kong now feels like China is trying to force its “one system” onto them. As they fight to keep their freedoms, they are getting almost no support from businesses in countries that enjoy those freedoms without question.

Companies That Have Caved

FIFA isn’t the only major sports organization to fall in line with China. After Houston Rockets GM Daryl Morey tweeted (and deleted) a pro-Hong Kong image, the NBA quickly distanced themselves. They said it was “regrettable” that the tweet “deeply offended” their friends in China. Morey quickly apologized and Rockets star James Harden was interviewed saying: “We love everything about them (China).” The NBA, and their recent $1.5 billion Chinese TV deal, are clearly siding with the money.

Yesterday morning, I wrote, “We’re Not Exporting Our Values to China — We’re Importing Theirs.”

The game was in Philadelphia.https://t.co/tS76erprL8

Meanwhile, California-based gaming company Blizzard just stripped GrandMaster Hearthstone player Blitzchung of his winnings and banned him for a year because he wore a mask and made pro-Hong Kong statements during a post-match interview. They even banned the interviewers, who ducked under their desks to avoid association with Blitzchung.

Gaming giant @Blizzard_Ent kicked star player @blitzchungHS out of its tournament, cancelled his prize winnings, and banned him from Hearthstone esports for a year for supporting the Hong Kong protests. What a disgrace. Deserves as much censure as the NBA. https://t.co/u2dihIofWA

FIFA, NBA and Others Should be Honest

Obviously, it would be asking a lot of international businesses to sacrifice their Chinese partnerships. No one would expect the NBA or FIFA to forfeit billions of dollars to show support for Hong Kong. But at the very least, they should stop pretending to be so progressive. You’re not pillars of the international community, uniting countries with the love of sports. You’re businesses and your first priority is money.

If you aren’t willing to show Hong Kong real support, at least give them something that the Chinese government won’t: a little more transparency.