Stassi Schroeder is finally facing a reckoning for her racist comments. But the “Vanderpump Rules” star was always this way.

Stassi Schroeder is finally facing the music. After years of microaggressions, racism, and general bad behavior, the “Vanderpump Rules” star is finally having to answer for it all.

She’s been dropped by both her publicist and her agent, and both she and her co-star Kristen Doute have been on a mea culpa tour for the past 24 hours.

Still, the question begs itself: Schroeder’s behavior has always been contemptible — so, what does it say about “Vanderpump Rules” fans that they let it slide for so long?

Stassi Schroeder Used to Pride Herself on Her Ignorance

At the peak of her popularity, Stassi Schroeder made a living off of being “basic.” Her ignorance was well-rewarded, of course: she was a “New York Times” best-selling author, had a hit podcast on Radio.com, and was one of the most popular castmembers on “Vanderpump Rules.”

Schroeder, for her part, called her behavior “keeping it real,” and intimated that anyone who thought otherwise was a “hater.”

I just feel like the more transparent you are, if you’re starting a company, say something you sell, being transparent about what that is I think is so important—transparency in everything that you do. People want the truth. They don’t want to be fooled. We don’t have time for that anymore. So any woman trying to start anything, be authentic, be honest, be transparent.

Even Lisa Vanderpump said that she wanted to be Stassi Schroeder, if only for a day.

If you had to trade places with someone from Vanderpump Rules for one day, who would it be and why?
Oh, probably Scheana because [she has] all these good looking, young guys and I never got a chance to do that in my life (laughing). I’m just kidding, that’s a joke! I’d probably go with Stassi. But they are all lovely girls and even Kristen [Doute] sometimes.

So, when she was raking in the money for her racist comments, Stassi Schroeder thought “honesty was important.” And she certainly didn’t express regret.

But that’s changed now that she’s finally being made to answer for her behavior.

Only after the #BlackLivesMatter movement has made people realize (after far too long) that it’s not cool to be a racist or to practice micro-aggressions against non-white people does she want to issue apologies.

We’re all for saying that people can grow and change with the times, but Schroeder made those “being basic is good business” comments less than two months ago.

How likely is it that she had an epiphany in eight weeks?

She’s Only Sorry She Got Caught

As we already know, Faith Stowers brought Stassi Schroeder’s racist past (and present) to light.

According to Stowers, who was one of the only black cast members on “Vanderpump Rules,” Schroeder called the police on Stowers for a crime she didn’t commit and had nothing to do with. 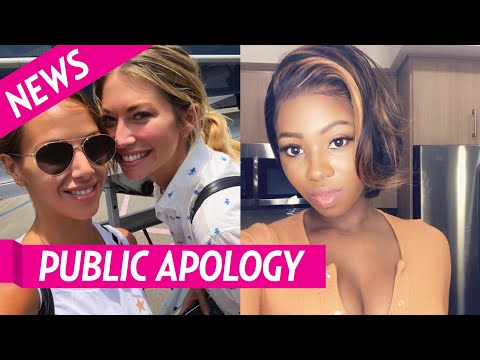 And the fallout was swift and intense.

Schroeder’s longtime publicist, Metro Public Relations, announced today that they were parting ways with her.

She became a client when her publicist joined our company in July 2018. We made the decision this weekend to part ways with Stassi.

And Schroeder is getting hit where she hurts — in the wallet — as sponsorships from the likes of Billie, Ritual, and Secret Deodorant have disappeared.

Yet even her apology reads like a basic “I’m sorry you got offended” cop-out.

Racially insensitive comments from my past have resurfaced. My emotions over something that happened between our friends outweighed my logic, and there is no excuse for that. I did not recognize then the serious ramifications that could have transpired because of my actions. What I did to Faith was wrong. I apologize and I do not expect forgiveness.

Stassi Schroeder’s not sorry for what she said. She’s only sorry she got caught — and that she’s finally being held accountable.

Bernadette Giacomazzo
Bernadette Giacomazzo is an editor, writer, and photographer whose work has appeared in Teen Vogue, People, Us Weekly, The Source, XXL, HipHopDX, The Los Angeles Times, The New York Post, BET.com, and more. She is also the author of The Uprising series and is the CEO of the acclaimed G-Force Marketing & Publicity firm, which has been featured in The Hollywood Reporter and has scored film, television, radio, and print placements for celebrity clientele worldwide. Reach her via email. Visit her website here, her MuckRack profile here, or her LinkedIn profile here. September 29, 2020 15 Comments
← PreviousKate Middleton’s Latest Stunt Was Peak Privilege at Its Worst
Next →Ne-Yo Gets Emotional at George Floyd’s Funeral – Twitter Buries Him