Afri Schoedon, a long-time Ethereum contributor, abruptly quit working on the second-largest cryptocurrency. A few days ago, Schoedon tweeted a meme that said “Polkadot delivers what Serenity ought to be. Change my mind.” The meme raised ire on Reddit, and the situation devolved from there until the developer quit early this morning.

CCN.com recovered the main catalyst to this incident. Here is the original meme that set off two communities on Reddit:

The tweet was first shared on the EthTrader subreddit and then cross-posted to the main Ethereum subreddit where Schoedon is a moderator. Importantly, the latter post hasn’t been deleted. Schoedon has participated in it, and he repeatedly linked users to a non-apology:

Now, to Ethereum outsiders, the original tweet might seem a bit tame. He’s apparently saying that blockchain project Polkadot is a superior solution to the various things that make up Ethereum 2.0, right? Well, sort of.

According to several users on the Ethereum subreddit, the tweet just serves as proof that Schoedon is intentionally sabotaging Ethereum development in favor of third-party scaling solutions like Polkadot. One user writes:

“We’ve been told for a long time now that Polkadot is not a competitor of Ethereum. Now Afri confirms that it is. Okay. So with that information, how can he in good conscious (sic) continue working on both?”

However, Schoedon has never contributed to Polkadot development. His GitHub profile shows as much. Most of his Ethereum work has been on Parity, an Ethereum client. The confusion arises because Polkadot is a product of the same company. Schoedon was a paid contributor for Parity. It makes sense that as part of his work he might have developed an affinity for Polkadot, but as he says in his posts on the subject, he was merely trying to create discussion.

Nonetheless, the backlash was stern. Ethereum users are wary of being “blockstreamed,” as this user says:

“Why did the [Ethereum Foundation] give $5 million to Parity when they clearly have incentives to obstruct progress with Ethereum? Feels like they are not only on a different team, but are blatantly trying to Blockstream us. Is this a shakedown to get more money, or more support to unlock their multisig funds? If that’s the case, I think they would be better served by writing an open letter to the ETH community explaining their position and requesting feedback on how to better collaborate without this passive aggressiveness.”

The statement probably requires some clarification. In essence, it refers to the belief that Blockstream, a Bitcoin company devoted to second-layer solutions like Liquid Network, has intentionally crippled on-chain scaling of Bitcoin in order to stimulate the need for their products. The belief is strong in the crypto community, leading so far to the creation of Bitcoin Cash and later Bitcoin SV.

Apparently, the view that Afri Schoedon and Parity generally want to hamstring Ethereum mainnet development in favor of Polkadot is quite prevalent. Reviewing the Reddit threads, it seems almost an accepted fact. This user says:

“The tweets were just the straw that broke the camels back. He has been trenating (sic) Ethereum development for nearly a year now by always seeking to postpone every upgrade and consciously introducing unproductive talking points in dev discussions.”

Here’s an Ethereum community video talking about Schoedon in the recent past: 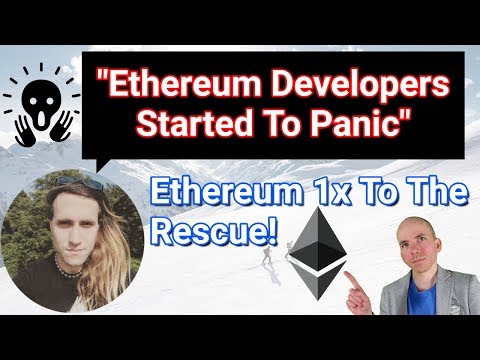 So, in response to what might be viewed as over-reactions from dozens of people, Schoedon has decided to quit his work on Ethereum. He also seeks to work in other areas of technology now. “Projects without a token” necessarily excludes any ICO-funded project.

Not everyone was happy to see him go. His followers on Twitter had a decidedly different reaction:

This is really a sad day for the entire Ethereum community – we just lost one of our most dedicated members for stupid reasons. @5chdn, I understand your reaction but sincerely hope you will reconsider. I hope we can all reflect and grow from the last days’ events. https://t.co/8PQJBxRpGA

I can’t avoid thinking this is more of a governance failure by eth community, than a successful job by a loud minority lynch mob (potentially coordinated from outside the community).🙄 Let’s be better and collectively support @5chdn any way we can…

It is total stupidity. @5chdn is one of the best contributors in the Ethereum community. I know it is hard after all of the bullshit but IMO you have to continue your good works by ignoring all the social media crap. A dev knows the value of another DEV

There was an exception, of course:

The episode, which was quick and had a resolution that seemed to disappoint, brings to mind the rocky exit of former Bitcoin developer Mike Hearn. Hearn, a proponent of big blocks, suffered severe trolling for several of his views. Many in the community at the time viewed him as a “corporate type” with bank-friendly aspirations. He reportedly sold all his Bitcoin and moved on to work for R3.