Elon Musk’s The Boring Company is living up to its name, with the latest bunch of naysayers of its tunnel being Virginia transit officials.

After they visited the 1.5 mile prototype tunnel being built under Los Angeles, they laid into it with criticisms. They are just the latest among a string of people who have visited the project and left unimpressed.

Beware if You Have Claustrophobia

In Virginia, plans are underway to build a rail including a $1.3 billion bridge between Virginia and Washington. The troupe of Virginian transportation officials trekked to Musk’s project earlier this year to get ideas for their plan.

If one day we decide it’s feasible, we’ll obviously come back to you.

One of the key concerns about the L.A. tunnel relates to its feasibility. They may sound simple enough. However, those related to regulations could stall the project or prevent it from ever becoming a reality. This is a concern for Virginia officials.

The state runs the risk of delaying any moves on its rail project if it waits for Musk’s tunnel to overcome challenges. Any technological advances being hailed in the prototype could be obsolete by the time all regulatory hurdles are jumped.

Other officials who whizzed through the tunnel with McLauglin reported that nothing they saw would lead them to change their approach to transit in the near term. Scott Kasprowicz, a Commonwealth Transportation Board member, says:

I don’t mean to suggest that they don’t have a serious plan in mind, but I don’t consider the steps they’ve taken to date to be substantive. They’ve purchased a used boring machine. They’ve put a bore in the neighborhood where they developed the SpaceX product, and they’ve taken a Model 3 and put guide wheels on it. They’re running it through the tunnel at 60 miles per hour. None of that, I think, is really significant from a standpoint of moving this process forward. 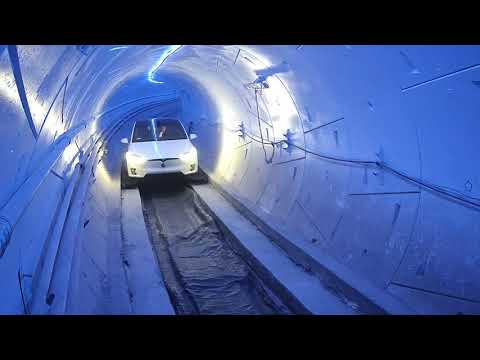 A Mashable reporter took a ride through the tunnel and walked away with similar thoughts:

The elevator is slow, and construction is rough and exposed. Switching on the green light to signal ‘go’ still appears to be a manual process. Most notably, the tunnel ride in a Tesla Model X was bumpy and didn’t surpass a top speed of 40 mph.

Musk has stressed that the tunnel is a work in progress. He has acknowledged that there are areas of improvement constantly being identified. The question is if others will have the patience to wait, or will they pass like the Virginians?