By CCN.com: As Tesla stock goes up in flames amid its “code red” crisis, Elon Musk enjoyed a small reprieve from the tsunami of bad news when his Boring Company won a $48.6 million Las Vegas contract.

The Las Vegas project is a milestone for Boring since it is the fledgling company’s first commercial contract.

The Boring Company is a tunnel construction firm Elon Musk launched in late-2016. It was initially a subsidiary of SpaceX, but it was spun off into an independent entity in 2018.

Loop Will Cut Transit Time from 15 Minutes to 60 Seconds

On its website, Boring says the LVCC Loop is a high-speed underground transportation system that uses autonomous electric vehicles that move up to 155 miles an hour.

Not surprisingly, the autonomous electric vehicles being used for the Las Vegas Loop are Tesla Model X and Model 3 cars. And a modified, high-occupancy Tesla Model X tram will transport up to 16 passengers at a time.

The Boring Company said it usually takes about 15 minutes to walk around the Las Vegas Convention Center. But Elon Musk says the LVCC Loop can cut that transit time down to one minute.

Tesla snapped a six-day losing streak, fueled by concerns over profitability and demand for the company's vehicles. Here's what five analysts have to say about Tesla's long-term success and how to trade the stock. https://t.co/vFHbnr72qq pic.twitter.com/9HQL6uFjdt

The project is expected to be completed by January 2021, which is when the Consumer Electronics Show takes place in Las Vegas. However, Musk upped the ante on Twitter, saying he plans to finish by the end of this year.

When asked how long the LVCC Loop will be, Musk said it will span two miles, using two tunnels.

After a horrendous week when Tesla stock got mercilessly pummeled, Musk was positively gleeful to share this bit of good news on Twitter.

As usual, Musk’s legion of followers reacted to the news with a mixture of kudos, snark, and comical retorts. One person suggested that Elon build a high-speed underground mail system.

Imagine the drugs that would be transported so safely with that

Still another observed with admiration: “Stock is going down, shorts are bashing at Elon and company, journalists are super-negative and Elon..he’s all chillin 😎 Respect ✊🏼”

One person asked: “How do you feel that Wall Street can’t handle you being a Meme Lord?”

While the Boring contract is good news for Elon Musk, there’s no denying that Tesla is in serious trouble. Its stock tanked below $200 this week, and closed today (May 23) at a dismal $195.

As CCN.com reported, Tesla is in dire financial straits. It only has $2.2 billion cash on hand, which is just enough money to last another 10 months. This has caused Tesla to plummet into a “code red situation,” according to Wedbush analyst Dan Ives, who wrote:

“If Tesla is unable to earn profit in the second half of the year, the company may need to raise another $1 billion to $2 billion of capital.”

Ives said instead of getting distracted by “sci-fi projects,” Musk should be “laser-focused” on Tesla.

“With a code red situation at Tesla, Musk & Co. are expanding into insurance, robotaxis, and other sci-fi projects/endeavors…The company instead should be laser-focused on shoring up core demand for Model 3 and simplifying its business model and expense structure.”

Meanwhile, Loup Ventures co-founder Gene Munster says everyone needs to chill out because “Tesla will turn the corner” (see video).  Loup Ventures is a research-driven venture capital firm based in New York and Minneapolis.

Munster says 2019 is undoubtedly a difficult year for Tesla, but he still has unwavering faith in Elon Musk.

“I am a believer in Tesla. I think they will turn the corner and capture what will be a juicy growth curve.” 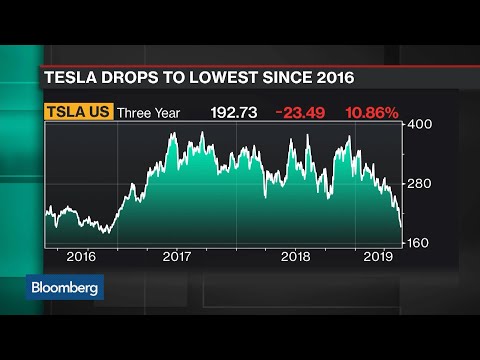